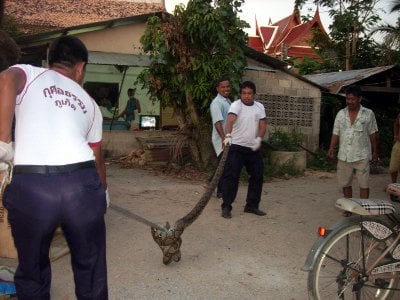 PHUKET: Villagers in Thalang who had been trying to catch a pesky python for weeks finally hit pay dirt yesterday, when the serpent slithered into their sleepy Phuket village just before sundown.

Residents of Baan Lipon in Srisoonthorn subdistrict Village 8 told the Phuket Gazette that the snake was often seen lurking around the lake near their village and the nearby Bang Jo Prison.

Repeated efforts by the villagers to catch the snake failed miserably until just before dusk yesterday, when the python boldly entered the village.

But on seeing the full size of the four-meter-long constrictor, the villagers decided to call for backup.

The python weighed in at a hefty 30 kilograms.

Respectful of the natural creature’s size, the rescue workers said they would go deep into the jungle far from the village and release the snake there.