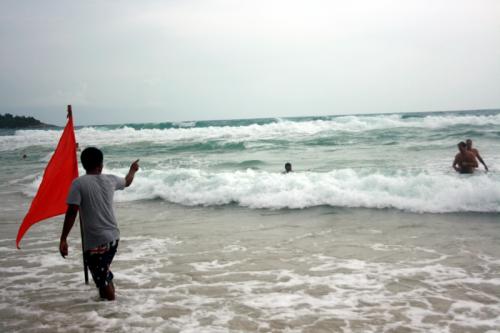 PHUKET: Following three tourists drowning at Phuket beaches within three days, the island’s authorities have issued a public plea for everyone to heed red warning flags, marking that the surf is too dangerous to swim.

Mr Singhal, on holiday with friends staying at Mai Khao Beach on Phuket’s northwest coast, travelled south to Kata Beach to enjoy the surf there, said Lt Sathaporn Seenoon of the Karon Police.

“He was pulled from the water unconscious and received CPR, then rushed to Patong Hospital, but he was pronounced dead on arrival,” Lt Sathaporn said.

Uten Singsom, head of the Kata-Karon Lifeguard Club, told the Phuket Gazette today that his lifeguards pulled more than 30 tourists from the water over the weekend.

“About eight people were sent to hospital,” he said.

So busy were the lifeguards at Kata and Karon beaches that they did not have time to record all the rescues performed, he said.

“As soon as we pulled one tourist out, we had to run to help others,” said Mr Uten.

“We have warning signs in many languages. I see tourists stop to read the signs, then walk straight into the water.

“I understand that tourists come to Phuket to swim at the beach, but if they really want to swim please swim where lifeguards are on duty and be careful of dangerous rip currents,” a frustrated Mr Uten said.

Lt Sathaporn of the Karon Police expressed the same frustration.

“There are red flags and lifeguards to warn tourists not to swim where it is dangerous, but they still go in the water,” he said.

Phuket Provincial Police Commander Choti Chavalviwat made a public appeal for tourists to respect the red flags and lifeguards’ warnings.

“We would like to warn everyone not to swim or play in the water at the beach because there are strong winds and big waves at this time. The waves are currently up to three meters high. They are very dangerous,” Maj Gen Choti said.

“Karon Municipality, lifeguards and hotel owners have the red flag posted to warn tourists – and other beachgoers – to not swim in dangerous areas at this time,” he added.

Lifeguards stationed at Phuket’s popular beaches urged tourists to beware the dangerous surf and rip tides brought on by the return of the annual southwest monsoon as early as June 3 this year (story here).

That warning came as the club’s local government contract to provide their essential life-saving services was approaching its expiry date – this Thursday, June 27.

To avoid further calamity, the contract was granted an emergency extension until July 27 (story here).