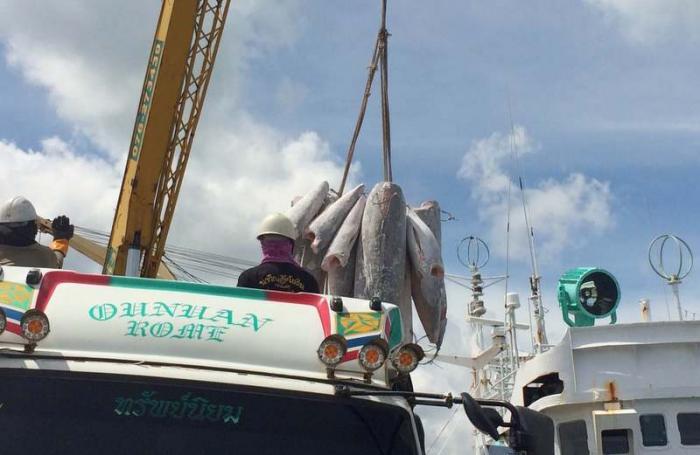 PHUKET: Officials from Department of Fisheries are removing about 2,700 tonnes of frozen tuna from two fishing vessels that were detained under suspicion of illegal, unreported and unregulated (IUU) fishing seven months ago.

The fish will be transferred from the Deep Sea Port, where the vessels are located, to cold storage at the Fish Marketing Organization in Rassada. The transfer was approved yesterday at the request of the vessels’ owner, who claimed that the company has spent more than 11 million baht on maintenance since the vessels were seized. The vessels engines were then shut down on Sunday.

The two vessels were named as Mook Andaman 018 and Mook Andaman 028. They arrived at Phuket Deep Sea Port on January 30 after tuna fishing in the Indian Ocean (story here).

A week earlier, before seizing the boats, Phuket officials arrested 37-year-old Thanongsak Raksawong, who was in charge of the two boats, after the Crime Suppression Division alerted Marine Police of his involvement with the vessels (story here).

Mook Andaman 018 was crewed by a total of 28 people from China, the Philippines, Indonesia and Vietnam. The captain was named as Huang De Tian.

Mook Andaman 028 was crewed by a total of 27 from China, the Philippines, Indonesia, Myanmar, Vanuatu and Vietnam. The captain was named as Zhou Feng.

Yosathon Chaleewan of the Phuket Muang District’s Fisheries Office confirmed that it will take a few days to remove all the fish, which will then be taken care of by the Department of Fisheries until the trial is concluded.