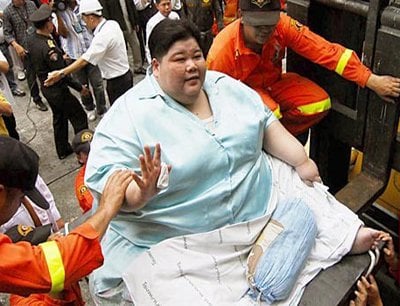 PHUKET: Overjoyed that she got to leave her apartment for the first time in three years, 40-year-old Amnuayporn Thongprapai, who weighs 247 kilograms (544 pounds) said she was confident that doctors at Central General Hospital would help her to walk again.

Bangkok Governor Sukhumbhand Paribatra, who was present while the woman was being helped out of her apartment yesterday, said he’d like to help in arranging for her to gain entitlement to welfare benefits. He said he had also arranged for her two children, ages 15 and 14, to receive scholarships.

Sukhumbhand said an initial check on Tuesday this week revealed that Amnuayporn had two tumours on her right leg, bedsores and high blood pressure. Her obesity is caused by a thyroid disorder.

Amnuayporn, who used to wash clothes and cook for a living, kept gaining weight over the past four to five years until she hit a whopping 280kg in 2006.

In order to take her to hospital yesterday, Bangkok City workers put Amnuayporn on a metal plate that could carry a ton of weight and then transferred it onto a hydraulic lift which was temporarily installed outside her balcony. Then a small crane was used to hoist her down to a fork lift truck which lifted her into an ambulance.

The entire operation took an hour to complete, and by 12.45pm Amnuayporn was admitted to the hospital. An initial check up weighed her in at 247kg.

Deputy Bangkok Governor Dr Malinee Sukavrejworakit said doctors would put her through blood tests to see if she had any metabolic or other disorders such as diabetes or bone or joint conditions.

The hospital has put a special medical team in charge of the case.

Treatment should take at least one year and doctors will decide if bariatric surgery is necessary to restrict the capacity of the patient’s stomach.

Once her medical treatment is finished, Umnuayporn says her dream is to go to the beach.

“I want to go to the sea,” she told the media with tears in her eyes. “I want to play in the water.”

Maybe we’ll see her soon on the beaches of Phuket.