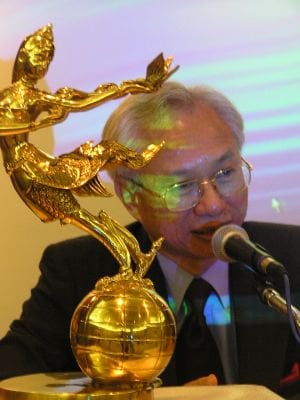 PHUKET CITY: The Thailand Tourism Awards 2004 were given their regional launch yesterday at the Royal Phuket City Hotel, showcasing the dual themes of environmental conservation and sustainable tourism. The Director of the local office of the Tourism Authority of Thailand (TAT), Suwalai Pinpradab, said that the fifth annual tourism awards competition will also encourage greater competitiveness vis a vis other countries. There are six categories in the competition: tourism sites; accommodation; tour programs; tourism promotion and development organizations; tourism development and promotion projects; and communication and public relations projects. Nominations may be submitted at TAT offices nationwide until April 30. The winners will be announced on September 27 – World Tourism Day – in Bangkok. For further information, contact the Phuket TAT office on 076-211036 or 076-212213. Meanwhile, three resorts and a golf course in Phuket have recently garnered a cluster of international awards. The JW Marriott Phuket Resort & Spa recently received the “Best Hotel Spa in Asia” award at the Condé Nast Traveller magazine readers’ awards in London. The resort’s Mandara Spa placed second in the world’s “Top 25 Spas” category of the same awards. The Banyan Tree Phuket received two awards in Asiamoney magazine’s annual awards – Asia’s Best Vacation Resort and Asia’s Best Health Spa – while the Blue Canyon Country Club took the honors as Asia’s best golf course. Le Meridien Hotels and Resorts is also in the limelight after being crowned Best Asia Pacific Hotel Group at the Travel Weekly Globe Awards in London earlier this month. More than 11,000 UK travel agents voted in the poll, often referred to as the “Oscars” of the British travel industry.