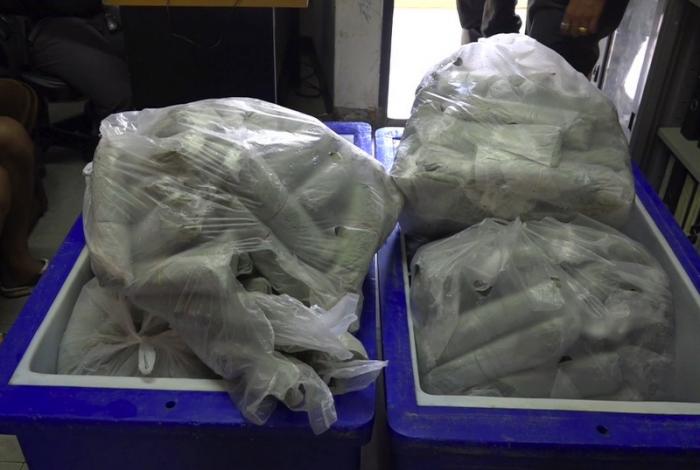 KOH SAMUI: A man was arrested with 100 kilograms of Krathom in Koh Samui on Sunday.

“At about 9am we were manning the checkpoint at the Seatran Ferry pier as usual,” said Samui police chief Paitoon Krajajang, “when we found a modified pick-up truck that had an oversized spare tyre and was riding low to the ground. It was suspicious, so we stopped the truck for inspection.”

Col Paitoon said that the driver, named as Chayaporn Tayeng, 29, also looked suspicious to police officers during their vehicle inspection.

“We found three plastic boxes in the back of the truck. When we opened them, we found they were full of about 100kg of Krathom leaves,” Col Paitoon said. “There were also 40 bottles of cough syrup and one sword in the truck.”

During his subsequent interrogation, Mr Chayaporn reportedly told police that he was hired to deliver the cargo from Nakhon Si Thammarat to Samui for about 10,000 baht per trip. Col Paitoon said Mr Chayaporn had made the journey six times already.

“To broaden the case, we asked him who he picked up the Krathom from and who it was being sent to, but he wasn’t able to tell us, as he was hired to pick up from an appointed place and drop the drugs at an assigned place as well without seeing anyone,” said Col Paitoon.

Mr Chayaporn was charged with possession of a category 5 drug (Krathom) with intent to sell.