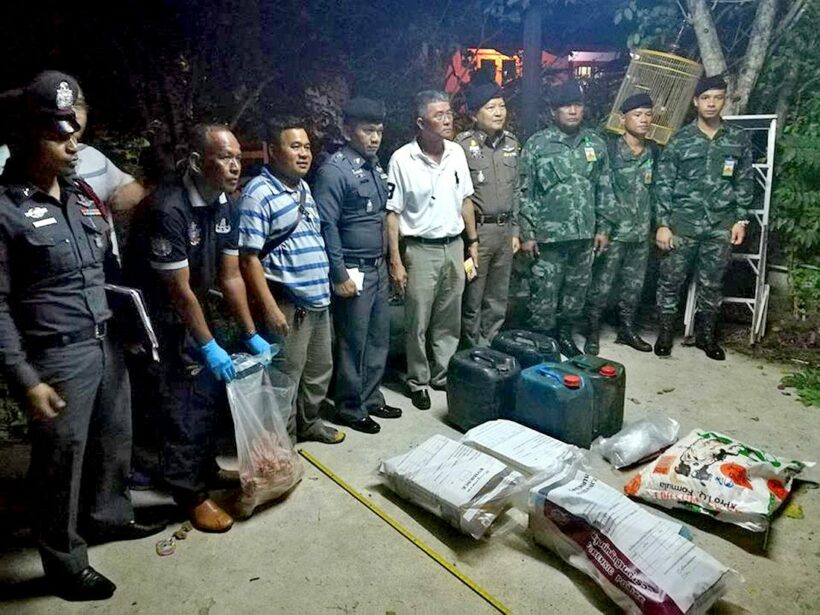 Five people have been handed over to the Crime Suppression Division (CSD) this morning (Friday) linked to the discovery of 1800 bars of ‘Powergel’ in Pathum Thani last month. Powergel is routinely used as a mining explosive and comes in the form of bars.

Two of the suspects are 46 year old Yutthana Chidchol, a police officer from Sakoo station in Phuket, and 55 year old Boonlert Nanphimai who is wanted in Pathum Thani.

According to reports earlier this week, ammonium nitrate fertiliser plus other bomb-making materials, including more Powergel bars, were found in Yutthana’s house in Thalang, Phuket.

Today a 47, 55 and 57 year old were also handed over to the CSD for questioning over the discoveries. Two others were picked up shortly after the Thalang arrests and claim that a ‘Kitti Sarisil’ had hired them to purchase and deliver the Powergel.

Since then Kitti Sarisil has been arrested after explosives, explosive fuses and other bomb-making materials were found following a search of a factory in Saraburi, just north of Bangkok.

Last week, on April 29, officers received a tip-off that a house in Cherngtalay, which belonged to one of the Phuket men, was used to kept items for bomb making.

Officers from the Royal Thai Army, the Phuket Provincial Police and Forensic Police searched the house. Inside they found two 30 litres and two 20 litres drums of ammonium nitrate fertiliser, 200 detonators.

In the meantime, investigating police are checking any links to the southern insurgency where bombs are used regularly by insurgents.

Six metre python released back to the Krabi forest