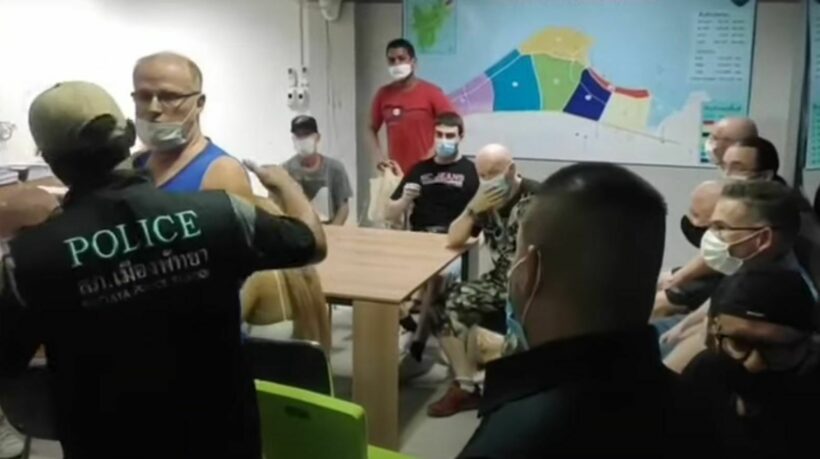 Yet another party breaking all Covid-19 restrictions was just broken up in Central Pattaya tonight, with 21 people arrested. The event was in front of the Tree Town Market area on Soi Buakhao and police raided the party just before 9 pm.

Pattaya and the rest of the Chon Buri province is now a maximum control dark red zone, and gatherings of more than 5 people are strictly prohibited and gatherings of any size with alcohol are also banned. The restrictions are regulated by the national Emergency Decree and Communicable Disease Act, as well as locally by the Chon Buri Provincial Disease Committee order.

The party attracted concern from several neighbours worried about Covid-19 spreading through large gatherings who alerted the Pattaya Police. When officers were dispatched to the party location, they found a group of 3 Thai people and 18 foreign nationals. Police reported that they were drinking alcohol and socialising in a big group in violation of the current Covid-19 restrictions.

The group seemed to be flagrantly disregarding all Covid-19 safety measures according to the police on the scene. They were all taken into custody and transported to the police station where they currently remain. The group faces multiple legal charges for the unlawful party and because of the emergency decree laws in effect, may face prison terms of up to 2 years and fines of up to 40,000 baht.

The identities of the partygoers have not been released to the public.

King Cotton
14 minutes ago, Reindevos said: The point is restrictions not help at all. Closing beaches pools tediculoud in a beachresort  like Pattaya and jomtien.! Nobody tells me that covid exist on the sea or pool? I guess there are always…
Stardust
17 hours ago, Soidog said: Thanks @King Cotton  I will try to be as  magnanimous as you when I read the term Farang Kee Nok next time 😉.  We will all disagree with each other  occasionally but this is a great forum and opposing views…
MARCO
5 hours ago, Stardust said: I think the same like you about the phrase "farang kee nok". One of my children is in the university and since covid they are making this group talks (all Thais online so I aske…
Stardust
51 minutes ago, MARCO said: Hi Stardust.  I know we are all off topic now but I found your comments intriguing.  That's because I understood the word 'nok' to just mean 'bird'.  Farang is self explanatory and 'kee' meant 'shit'.…
MARCO
Thanks for that. Always good to learn something new. 😎

Teenagers arrested for handing out small bombs at Bangkok protest