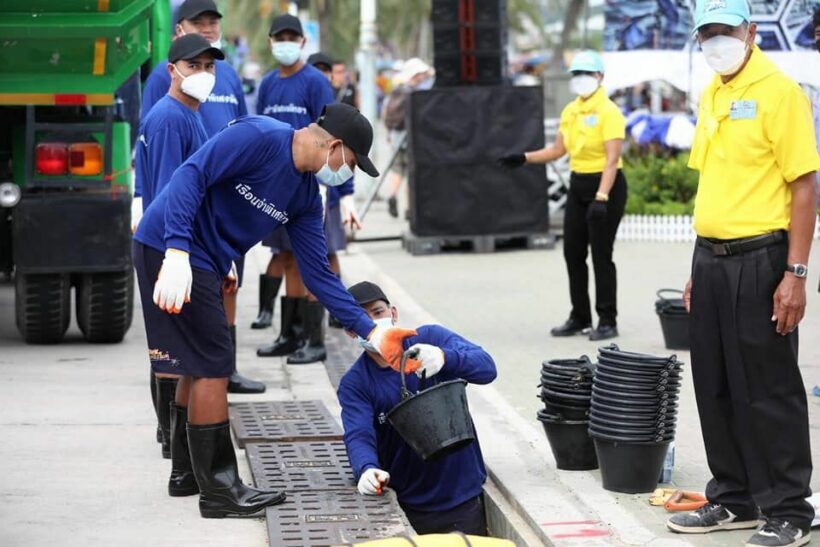 Monsoon season brings floods to every region of Thailand year in and year out. This year, Pattaya’s prisoners are taking action to mitigate the flood risk. On Monday, inmates from Pattaya Remand Prison began the mammoth task of cleaning out the city’s clogged up sewers for the first time since before the pandemic began.

Well-behaved inmates, alongside city hall sanitation staff and Pattaya Mayor Poramet Ngampichet, put on their rubber gloves and wellies, picked up their buckets, and began to dredge the city’s sewers on Monday.

Deputy Director-General of the Department of Corrections Narong Juisai presided over the opening ceremony of the project. The prisoners are working for 2 days on the task, which finishes today.

Pattaya prisoners began cleaning the city’s canals and sewers 5 years ago, but the initiative was put to a stop when the Covid-19 pandemic began over 2 years ago.

Last August, heavy rainfall in Pattaya caused 1 metre floods which caused huge disruption to the city’s major roads, such as Sukhumvit Road, and left many vehicles stranded. Residents got fed up with repeated flooding and pleaded with local authorities to take action.

Heavy rainfall is guaranteed but clogged up drains that fail to efficiently drain rainwater is what causes floods. So, retrieving the sludge from the sewers is an important job and a big responsibility for Pattaya’s prisoners.

Unclogging the sewers might not seem like a glamorous job, but is a privilege for prisoners who would not otherwise have the chance to leave the prison grounds. To be eligible to join the sewer squad, prisoners must have shown good behaviour during their time behind bars.

In April last year, a major water drainage system intended to mitigate flooding was installed in the Jomtien area of Pattaya. Current drainage pipes were widened and more pipes were added. However, the new system proved to be inefficient when bad flooding occurred in the August that followed, leaving many of Pattaya’s roads underwater.

Bluesofa
33 minutes ago, Prosaap said: Maybe if they stop trow all there shit on the streets and put in a garbage bin it will help a lot also  I agree about the rubbish being thrown everywhere without any consideration. I…
dbrenn
If cleaning sewers is the reward for good behaviour, one wonders what happens to those who behave badly.
Skip
Oh no!  Here we go again... prisoners working... shameful

Bluesofa
32 minutes ago, Skip said: Oh no!  Here we go again... prisoners working... shameful 'prisoners working' - did you think most of them were faulty?
HiuMak
They might have a permanent job with the sewerage company after their release