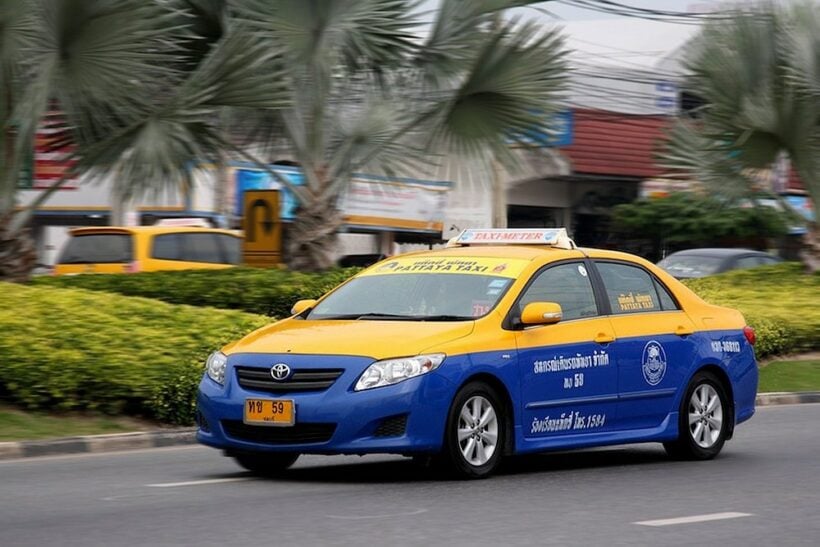 Pattaya taxi drivers are trying to make a deal with authorities. They’ll use their taxi meters IF authorities increase the flag fall for taxi trips to 100 baht.

Pattaya taxi operators met yesterday (Monday) to decide that 100 baht is an appropriate flag fall for the first two kilometres of any journey. The cost after the first 2 kilometres would be 20 baht per kilometre.

Pattaya News reports that the taxi operators see the solution as a way forward after constant criticism from authorities and tourists that taxi drivers refuse to take rides where passengers insist on the drivers using their meter. This has resulted in tourists having to bargain fares in advance – a situation that has led to rip-offs and an unmanageable system.

Operators intend to present their 100 baht glad-fall plan at a meeting planned for Thursday.

The flag fall in Bangkok remains at 35 baht and has been set for many years with authorities coming down hard on taxis that tenure outside the prescribed fees. The fare per kilometre is also a fraction of what is being demanded in Pattaya. In Phuket taxi drivers almost uniformly refuse to turn on their meters unless passengers are travelling from the Phuket International Airport where the situation is under constant scrutiny from officials. Keep in contact with The Thaiger by following our Facebook page.
Never miss out on future posts by following The Thaiger.
News Categories:Pattaya
Related Topics:
Up Next

Pattaya residents made a grisly find today at the Nongprue Municipality tip this morning. Whilst digging for items they could recycle and sell, they discovered the dead body of a baby. Police are now launching an investigation for the individual responsible. Nongprue Police were notified of the discovery of the corpse of the newborn baby at the garbage dump at the Nongprue Municipality tip this morning.

Emergency responders arrived at the municipal garbage dump to find the body of the baby inside a black plastic bag amongst all the other garbage. 38 year old Sirithon Tapjeen, who made the horrifying discovery, told The Pattaya News that she and some associates were searching for plastic bottles to sell for recycling.

She says she “smelled something rotten before realising that it was a dead newborn baby”.

Police are now trying to find the infant’s mother and anyone associated with the dumping of the body at the site.

A 32 year old man is lucky to be alive after being attacked by a tiger yesterday whilst feeding it at the Elephant Kingdom park in Pattaya. Only quick action from park staff prevented the man from being mauled and killed by the animal. Emergency responders were called to the scene at around 3.30pm at the Elephant Kingdom in Huay Yai, Banglamung.

The injured man, named as Thitiphong Makkarom, suffered injuries to his legs, arms side of his face. He was rushed to hospital. Friends and fellow workers say that Thitiphong was feeding 3 tigers inside a cage as normal. The park has been closed due to the lack of tourists. They told reporters that Thitiphong had never had problems with these tigers before.

But one of the tigers “jumped” at the worker and started attacking him, apparently unprovoked. Nearby staff saw what was happening and rushed to help pull him away from the attacking tiger. Their quick action probably saved him from being killed.

The Elephant Kingdom Park has been closed since the start of the outbreak of the coronavirus in Thailand back in March. But staff have remained employed to continue feeding and taking care of the animals. The incident is now being investigated and police say they will interview Thitiphong when he is able to speak to them.

A Russian resident in Pattaya is offering a hefty reward for anyone who finds her missing 9 month old cat. The woman, 46 year old Oksana Kobzar met with Associated Pattaya Press today to send out the message of the reward for finding her beloved white Main Coon furry friend.

Kobzar says her treasured pussy left her house in Bang Lamung District in Chonburi Province earlier this week and her family has had no luck finding it. She says the cat is a rare breed in Thailand and she had bought it for her daughter’s birthday. The long-time expat also noted that other cats have gone missing in her neighborhood in the past few months.

Below is the poster with information on how to contact Kobzar if the cat is found.