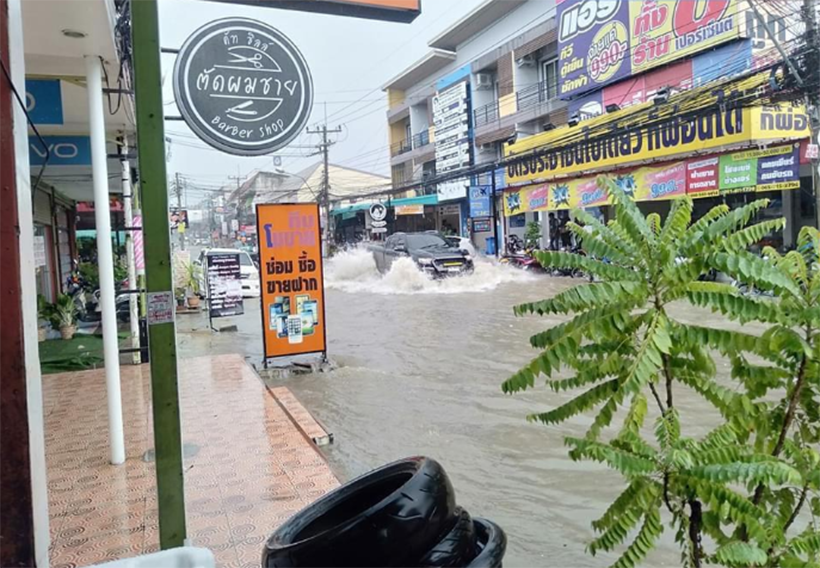 A video has gone viral showing foreigners driving a pickup truck that was stopped by 2 Thai guys pursuing them after reports that the pickup allegedly sped through a heavily flooded area in Pattaya, near Soi Khao Noi, causing a motorbike with a pregnant woman to get clipped, making her fall off and the motorbike crash.

26 years old Satuek Phu Khokwai, along with 20 years Wongsakorn Bunnag, was working at the motorcycle repair shop when the incident happened.

The two reported that they ran out after the woman was injured and pursued the vehicle, forcing them to stop by parking in front of it. They demanded the driver, who they claim was a “Caucasian female”, and the “male Caucasian” passenger stop and wait for police due to the woman being injured.

At this point, the foreign Caucasian male passenger, reportedly drunk, stepped aggressively out of the vehicle, shoved one of the men and started to shout at them in a foreign language.

He and the female driver then fled the scene.

As it is the rainy season in Thailand The Thaiger requests people drive with additional precaution, especially when the road is flooded, and be mindful of the spray from your tyres causing problems for nearby motorbikes.