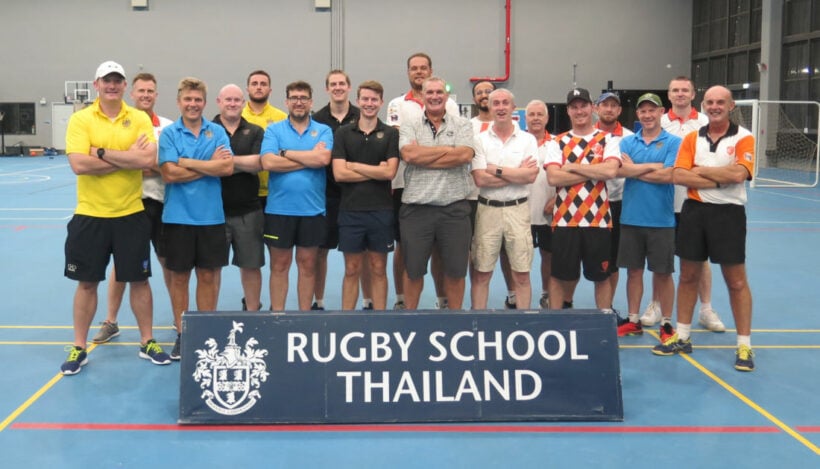 September 12 was the inaugural round of the recently created Pattaya Indoor Cricket league.

This hotly contested match also saw the appearance of new members to PCC – Luke Stokes, Matt Harkness, Jainish Parikah and Colin Clark (actually a returned player). There are other new members but they will be playing in future matches. Welcome to PCC.

There was no net surrounding the playing area, so instead of a 30 x 10m netted area, the game was played in one half of the indoor hall, about 50mx40m. Each game was 12 overs with a max of 3 overs per bowler. Each batting pair faced 3 overs. A normal run between the wickets counted as 2, hitting the side wall or roof scored 1, boundaries behind the keeper scored 3, hitting the far wall was 4 or 6. Wides score 2 which are awarded to the batsman (ECB Indoor rules 13h).

Simon Philbrook was unable to play due to a damaged shoulder, so captaincy was delegated to Colin Clark. We lost the toss and were asked to bat. John Harvey and Jainish Parikah opened for the first 3 overs. The first over yielded 9 runs off Lewis. A good start.

The second over was not so good with John being caught behind by Guthrie and 4 runs from wides. The third over brought 7 runs for John, 4 for Jainish and 2 extras, giving totals 12 each for the loss of 1 wicket.

The next pair was Luke Stokes and Matt Harkness. They set about the RST bowlers with gusto and although there was only one long boundary there were plenty of quick singles, shots off the side wall and runs behind the keeper. Luke got 16 and Matt got 21 without the loss of a wicket.

Colin Clark and Wesley Masterton were the next pair. Their first over against Chris was very productive but in the 2nd and 3rd overs Guthrie and Matt’s pace and a swinging ball proved to be more difficult. In their second over Colin’s enthusiastic backing-up was met by a resolute “No” whilst he was in No Man’s Land and the inevitable resulted. In the third over which grossed 12 runs, Wesley’s attacking style and advance down wicket led to a stumping. So, 15 runs for Colin, 18 for Wesley but 2 wickets lost.

The final pair was Richard Holt and Bernard Lamprecht. John bowled one very slow, bamboozling over but managed to take 2 wickets and give away only one wide. In contrast, Lewis and Chris bowled with great pace and took one wicket each whilst conceding 15 runs including extras. Holty scored 4 and Bernard 13, but the loss of 4 late wickets would prove costly. PCC finished with 82 having lost 7 wickets.

RST’s turn to bat got underway through Peter and Chris. They made a good start but not by the dint of good batting, although their wickets were kept intact, 22 extras given away by PCC. RST scored 38 in 3 overs but only 16 off the bat.

A different Chris, and Matt took the crease and set about John’s bowling. 16 of the 4th over. 54 for 0 off 4 overs. Crikey. Something needed to be done. Enter the Man of the Moment – Wesley. Searing pace staunched the flow of runs; forced Colin to stand back a few metres and RST gave up 2 wickets for 4 runs. That’s more like it.

Lewis and Guthrie arrived next and were subject to more PCC pressure from the bowling of Wes, Matt and John. RST could only manage 20 more runs for the loss of a wicket to Wes. Game on. PCC were 8 runs ahead.

The final 3 overs yielded 15 runs and one wicket. RST ran out the victors by 7 runs.

A great start to the league. A really close match and let’s hope we can triumph in the other matches.

Why the Chinese are more important than Western tourists to Thailand