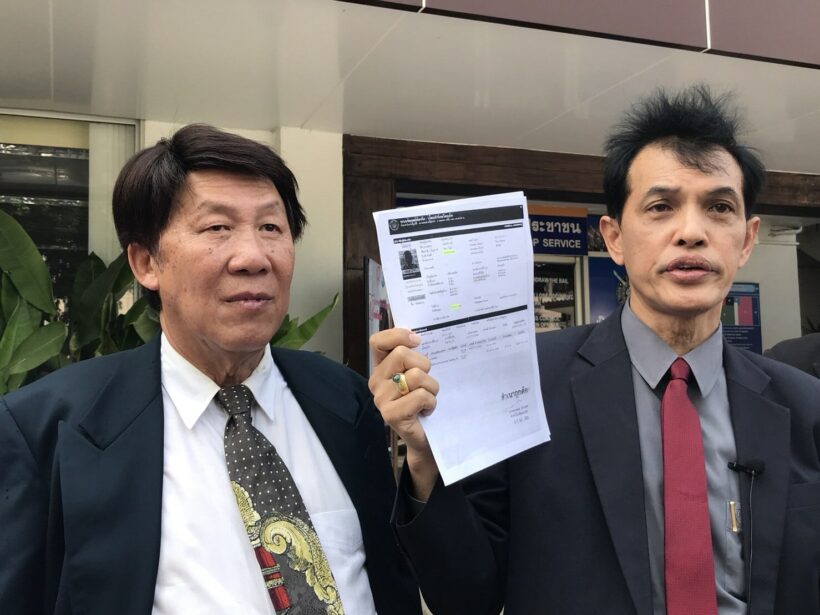 The Patong Paragon Hotel operator, Wisit Iew-Wirotrit, together with his lawyer, Ananchai Chaiyadet and his lawyer team, visited Patong’s Police Station to issue litigation against the army officers and his former employee, both for criminal and civil charges, asking for 100 million Baht compensation.

The charges include unlawful detention and perjury.

The lawyer said prior to the police report that… “the video of military officers visiting the hotel on March 27, and the following news released by them, has defamed my client and we will sue everyone involved in both civil and criminal laws. We have gathered 80% of the evidence and witnesses and will ask for 100 million Baht compensation.”

“There’s a clear CCTV camera footage as evidence of unlawful detention. I want the cases to be judged in the civil court, not military court, because we don’t trust the Army. We will also be reporting alleged perjury to the Damrongtham Centre.”

He said that the video was released with the explanation that the officers were asking for a bribe. The Army Region 4 and the Internal Security Operations Command (ISOC) Region 4 then held a press conference about it and some parts of the press conference defamed my client. He doesn’t have a problem with the army but only a small group of military officers. The video content refers to my client and we are considering to report it as either defamation or against the computer crime act.

“For the case regarding police officers who were at the hotel and have been transferred recently, we are pleased to help them because they were just called to have some coffee at the hotel and were not guarding my client. It is unfair for them.”

“Among the shareholders of Patong Paragon Hotel, there is a business conflict and they are suing each other for both civil and criminal law. Around February last year, a military unit tried to send their officers to the hotel to negotiate with my client and we have the list of names. However, it ended with a promise that they won’t be involved anymore.”

My client already reported him for trespassing while he has reported to Damrongtham Centre that he had been threatened. The centre filed the report to the army and this is why the nine armed military officers paid a visit to the hotel on March 27 without any notice.

They said that they had to arrest my client as well. They claimed Section 44 as a reason to arrest him but my client refused to be arrested.”

“My client isn’t the person who released the video and is not involved in this. The defamation that he is a mafia figure has caused him major loss of integrity and income and he fired the former employee under the law. There is also a letter from the army unit located at Cherngtalay Wittayakom in Thalang, asking him to report himself and subject himself to investigation because there’s a report from local people about him. He says he wouldn’t go to the unit unless there’s a new set of army officers there.

“In addition, we learned that the former employee wasn’t detained at the border. He actually was arrested for drugs at Muang Phuket Police Station with clear evidence. I want to ask Damrongtham Centre and the army if they know about this.”