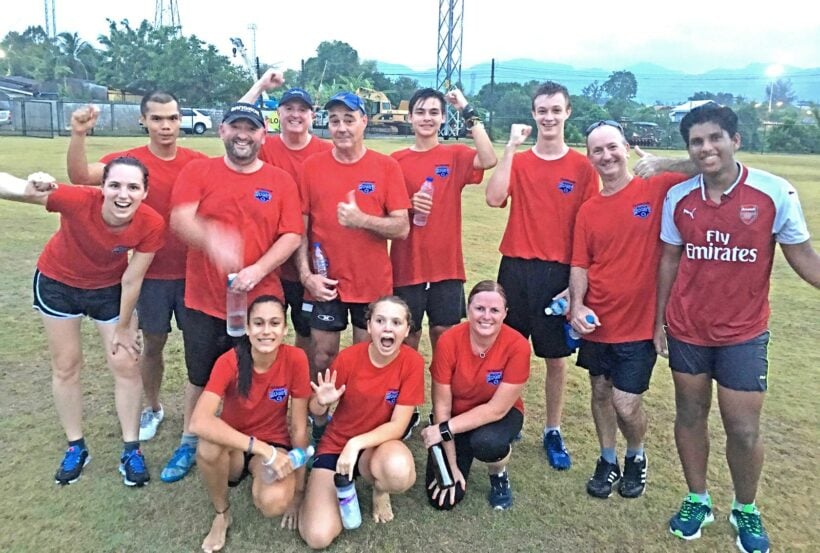 The Outrigger Laguna Phuket Beach Resort once again hosted a well organised and incredibly competitive Touch Rugby tournament at the Alan Cooke Cricket Ground in Cherngtalay, during the month of March.

Following on from the previous two successful seasons, five teams from Phuket battled it out on the playing field, all vying for the trophy and bragging rights as winners of the Outrigger Touch Rugby Tournament. It was a closely fought four week tournament with all five teams only separated by four points come grand final day on Saturday March 31.

Both semi finals between Outrigger Blue v Hashtags as well as Soi Dog v UWC went to extra time – such was the nature of the family-friendly, though competitive tournament.

The final between last years victors UWC and previous winners Hashtags, also came down to the wire. Nothing separated the two teams at full time with the score 3 – 3, however extra time saw Hashtags cross the line in a dramatic try, on the rain affected pitch to take the victory.

Congratulations to all the captains and players who participated in the tournament in great spirit, a special mention to Damian Clowes, of Outrigger Hotels and Resorts, for once again organising a family fun-filled tournament.

Nothing to see here… move on. Prawit opens up about wristwatches.

Jonathan Davies in Phuket for Charity