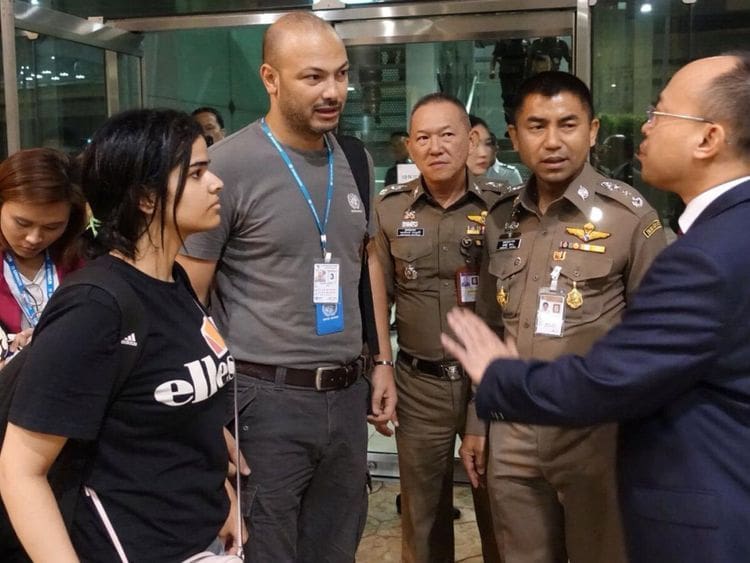 Thailand could have blood on its hands if it fails to protect a Saudi traveller on her journey to freedom.

The fate of a Saudi woman on her way to Australia, where she has a visa and seeks to obtain asylum, teetered in the balance in Bangkok at press time yesterday. Amid Thailand’s apparent willingness to deport her back to Saudi Arabia, rights lawyers representing her failed to get a Bangkok court to accept an injunction against her repatriation, which could have spelled her doom. Then came an abrupt about-face as the head of Immigration announced that, contrary to his earlier remarks, she would not be deported against her will.

Rahaf Mohammed al-Qunun, 18, had barricaded herself in a hotel room near Suvarnabhumi Airport while Thai authorities fumbled over a case that could have grave repercussions for our country. She believed she would be killed if Thailand sent her back to Saudi Arabia, where her family has allegedly subjected her to physical and psychological abuse.

According to reports late Sunday, Saudi and Kuwaiti officials seized her as she deplaned at Suvarnabhumi and forcibly confiscated her travel documents. New York-based Human Rights Watch has backed up her claims, though its sources are unclear.

“They took my passport,” al-Qunun was quoted as saying by news agency AFP, adding that her male guardian had filed a complaint in Saudi Arabia that was she was travelling “without his permission”, as Saudi law requires of women.

“My family locked me in a room for six months just for cutting my hair,” she said.

Thai Immigration chief Surachate Hakparn first told reporters that Qunun was barred from entering Thailand because “she had no other documents such as return airfare or money”.

She insisted she had valid travel papers and was merely in transit through Bangkok en route to Australia, for which she had a visa.

Human Rights Watch was appalled by Thai Immigration’s apparent readiness to accommodate the Saudi authorities. “What country allows diplomats to wander around the closed section of the airport and seize the passports of passengers?” deputy director for Asia Phil Robertson asked, pointing out Saudi Arabia’s horrendous record on rights.

It will indeed be encouraging if the Thai government takes a firm stand in the matter after foreigners overtly trampled our sovereignty. Diplomatic relations with Saudi Arabia have gradually improved since the ruinous affair of a Thai stealing gems from the Saudi royal family more than two decades ago. We owe the Saudis nothing. If there is even the slightest possibility that this woman’s life is in danger, Thailand must oppose her repatriation.

The incident comes just three months after Washington Post columnist Jamal Khashoggi, a Saudi who was critical of his country’s rulers, was murdered at the Saudi consulate in Turkey. That case has roiled international opinion.

Thailand cannot afford to be at the centre of another such controversy, even if this one has a far lower profile. But there was Surachate early yesterday saying al-Qunun would soon be on a plane bound for Saudi Arabia.

“It’s a family problem,” he said, sounding devoid of compassion. Surachate appeared not to have heard – or not to care – that a member of her family vowed on record that Qunun would indeed be severely punished on her return, possibly even killed.

This is decidedly not a “family problem”. It is a direct threat to the same fundamental human rights that Thailand has sworn to protect, even if Saudi Arabia does not extend such rights to women.

Al-Qunun has every right to flee harsh treatment at home and seek asylum in a country willing to protect her. Tragedy could ensue simply because, on her way to gaining freedom, she first touched down in Bangkok.

Published originally on The Nation

What’s the use of number plates if you can’t read them?