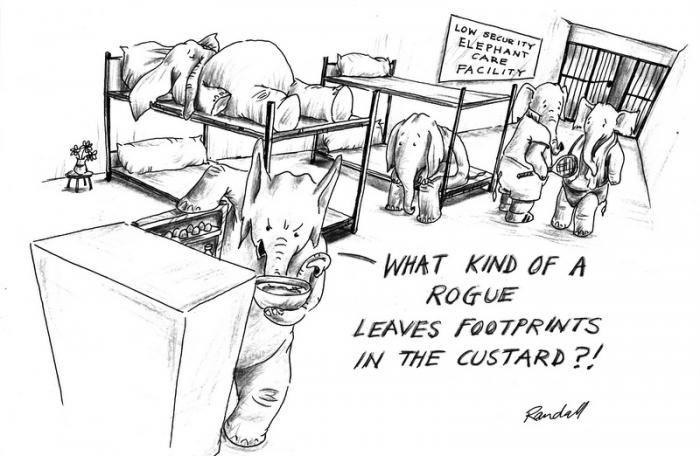 PHUKET: Recent damage to three vehicles by a couple of needle-shy elephants in Phuket is unfortunate (story here and here), but the incidents give cause to reflect on the state of elephants in Thailand.

Not only is the elephant Thailand’s ‘national animal’, it also featured on Siamese flags for almost 100 years before the creation of the modern Thai State.

Rough estimates put the number of captive elephants at about 3,000, with an estimated 2,000 more living in the wild.

By their very nature, elephants should be the easiest of animals to keep tabs on. Until quite recently, however, there was no nationwide effort to keep a comprehensive database of all elephants living in captivity here.

The current government deserves credit for the effort to get DNA samples for all domestic elephants to create a ‘parenthood tree’ that could put an end to transnational elephant smuggling, as well as the capture of young elephants in the wild to serve in the tourist trade.

Whether or not the tourism industry should be allowed to use elephants is debatable. In a perfect world, stable populations of humans and wild elephants could sustainably co-exist.

Given the human population explosion and subsequent habitat destruction, keeping as many of these remarkable animals alive as possible is probably the most realistic strategy for their long-term survival.
Thai law stipulates that only calves born to captive mothers can be kept legally.

According to some estimates, the Department of National Parks has already taken DNA samples from more than 90 per cent of captive elephants, which means that before long, virtually all young captive elephants can be accounted for, at least theoretically. The next step should be to ‘confiscate’ illegal elephants and find new homes for them.

This will not be easy since elephants are famously ‘high maintenance’ creatures. The government plans to establish new sanctuaries and enact new legislation allowing qualified NGOs and other private organizations to play a role in this effort.

The long-term goal should focus on preserving what remains of their natural jungle habitats. Failure to do so would be just as perilous for us as it would be for them.