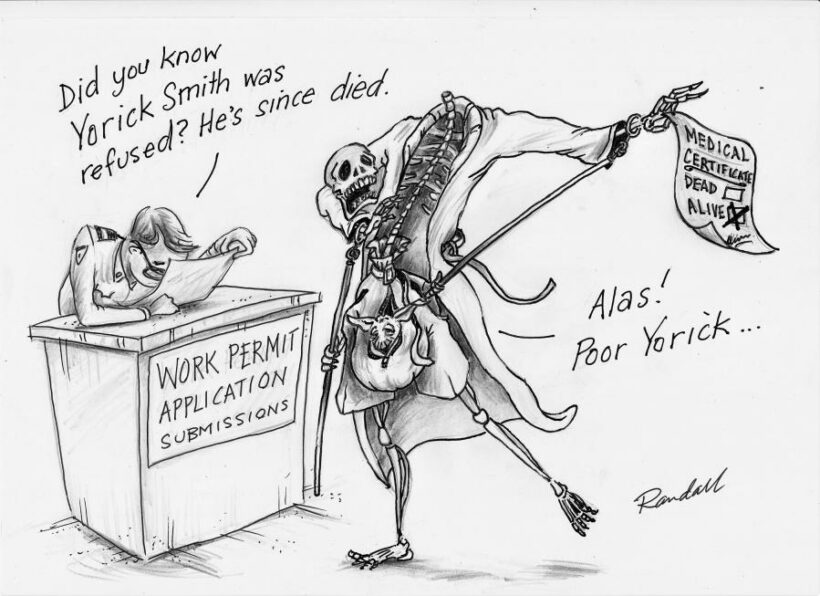 PHUKET: As part of its ongoing reforms, the current government should revise or eliminate the Medical Certificate (bai raprawng phaet) as a requirement in so many government application procedures.

In the process of renewing his work permit, this editorialist was recently handed a form citing, among numerous other documentary requirements, “a medical certificate certifying that the applicant is free from the prohibited deceased“.

In theory, it makes sense to have a doctor certify that seekers of a work permit are in good health and free of dangerous contagious diseases.

In reality, though, there are countless private clinics in Thailand that will serve up a medical certificate in a jiffy. Just walk in and ask for one. A receptionist will hand a form to what may or may not be a doctor for signature. In many cases you’ll not see that person, nor will anyone even check your pulse to be sure you’re not a member of the walking dead. Pay 200 baht and you’re off to the next hurdle in a bureaucratic paper chase that has no finish line.

Of course some hospitals do have protocols that pay at least a modicum of respect to the notion that a medical certificate really shouldn’t be a joke.

“Do you have elephantiasis?” is always a major feature in the application process at such institutions.

Merriam-Webster defines the condition as an “enormous enlargement of a limb or the scrotum [testicle bag] caused by…worms (especially Wuchereria bancrofti).”

Is it an epidemic? What are the odds of contracting it? Just how great a threat to national security is a lavish alien ball pouch?

Currently the only lab test for a work permit is syphilis. What are the odds of anyone having that these days? If it’s widespread here, that would certainly be news to the Phuket Gazette. There are a number of other, more prevalent conditions that would pose a far greater risk to public health and fitness for work.

It is impossible to estimate how many man-hours and baht have been wasted down this outdated, bureaucratic abyss. The only beneficiaries are the owners of the clinics.

It is time for the government to either standardize and modernize the system or just scrap it altogether.

Opinion: The role of sugar in Thailand’s worsening obesity epidemic