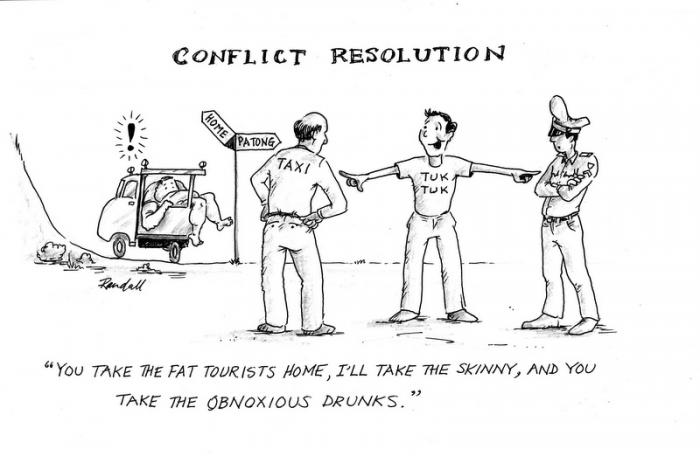 PHUKET: As Phuket’s tourism industry prepares to welcome an influx of international arrivals for the upcoming high season, the island’s image has once again been tainted by violence within the taxi cartels.

Turf wars among the island’s tuk-tuk drivers is one of the lines of inquiry Phuket police are looking into following the shooting murder of the president of the Patong tuk-tuk drivers’ consortium on Tuesday (story here). Sakol Srisompoch was a long-time activist for tuk-tuk drivers’ rights, leading more than 100 tuk-tuk drivers in protests against illegal (black-plated) taxis in June 2013 and again in March 2014. So far though, the reason for the shooting remains a mystery and at this stage, one can only speculate about why he was ambushed and riddled with bullets in the early hours of the morning.

The week has also been marred by viral videos of violence between taxi drivers and tourists, with an altercation between a Russian biker and a taxi driver in Karon (story here), which was shared on social media around the world. The tit-for-tat exchange of blows was captured on the mobile phones of bystanders. Thankfully, the fight ended when the pair were separated and dragged away from each other. While it was unclear exactly what sparked the brawl, a clash of cultures and possibly the language barrier was most likely at the root of the altercation.

Unfortunately, Russian tourists in trouble on the roads seems to have dominated the news this week, following the death of a 20-year-old Russian diving instructor whose body was pulled from the burnt-out wreckage of an NGV-powered jeep he’d crashed on a slippery road in Wichit (story here). The next day, a Russian woman on holiday here was charged with criminal damage after throwing bricks at vehicles in Karon at 4am (story here). Also in the news this week was the death of two Russians when their car slid off the road at high speed and piled into an electricity pole along the bypass road (story here).

While it is the Phuket Gazette’s long-standing policy not to publish graphic images of dismembered and disfigured bodies, one does wonder if revealing the gruesome results of fatal traffic accidents, that our news editors see almost daily, could somehow make people think twice and possibly help save a few lives.