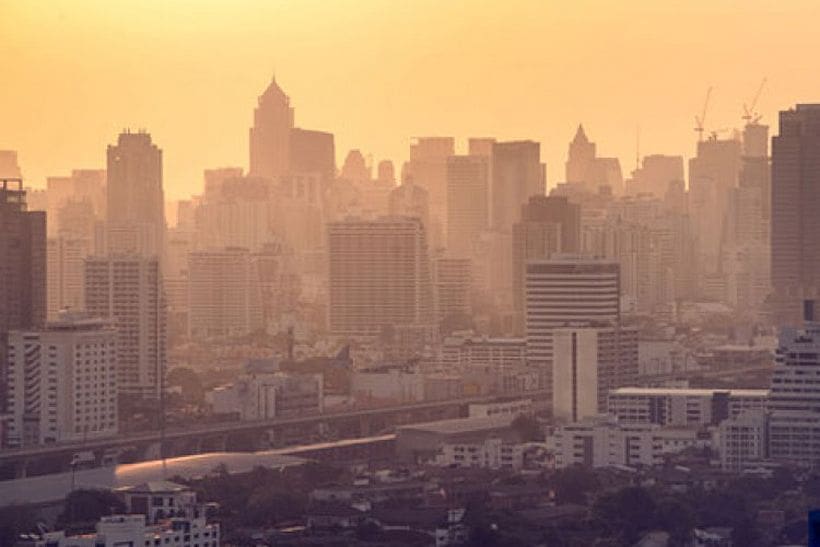 Four water-carrying drones took off from Bangkok City Hall this morning to join three fire engines in the latest assault on health-threatening haze.

Bangkok is a city covering some 1,500 square kilometres with a population of over 8 million. The frequent media ‘photo opportunities’ of water cannons, fire trucks spurting perfectly good drinking water into the sky and domestic drones spraying their 10 litre loads into the air, are lapped up by the local media but are doing nothing to address the key air pollution issues.

In the grand scheme of things, nothing.

The Bangkok Governor indignantly replied to a journalist who dared to ask him if the drones would help reduce the city’s air pollution with the response “at least we’re trying something”.

Whilst this media show continues, Bangkokians, adorned in cheap facemarks that are more a fashion accessory than a reliable health prevention measure, continue to suffer the month-long haze and smog that has settled over the capital.

The readings of ‘Unhealthy’ provide a daily scorecard of the Bangkok authorities’ efforts.

Last week, bereft of any workable solutions, a spokesperson for the Pollution Control Department even went as far as debunking the science behind the measurement of the PM2.5 micron particles and said the websites publishing the air quality readings were ‘greatly exaggerated’.

Whilst being a very visible and photo-worthy effort, the water sprayed into the air sells umbrellas and that’s about all.

The Nation reports that Pol Lt Colonel Somkiat Nonthakaew, director of the BMA Fire and Rescue Department, reported a small change in plans from yesterday’s deployment. The three fire engines, each with a 10,000 litre water tanks, were spraying water to lower heights, while the drones would be spraying the air from 30-50 metres’ altitude.

Water was also being sprayed from the 37th floors of tall buildings (why the 37th floor?). The operation would continue for “as long as it takes”, Somkiat said to The Nation.

Whilst this show is being played out in Bangkok, the burning of agricultural fields – rice and sugar cane plantations mainly – continues in the central, north-eastern and northern plains of Thailand. And the old diesel buses, along with other old cars, keep plodding around the city and environs every day pumping out plumes of black smoke.

But NONE of these issues, the core problem of Bangkok’s air pollution issues, are being actively addressed, or even admitted by the authorities.

Nature, a change in the weather and the progression of the seasons is the only thing that will clear this mess in the short term. It won’t be the 50 drones dropping their gooey loads onto the streets below.

Meanwhile, the burn-offs continue in the agricultural sectors of Thailand, the largest sector of voters in the country.