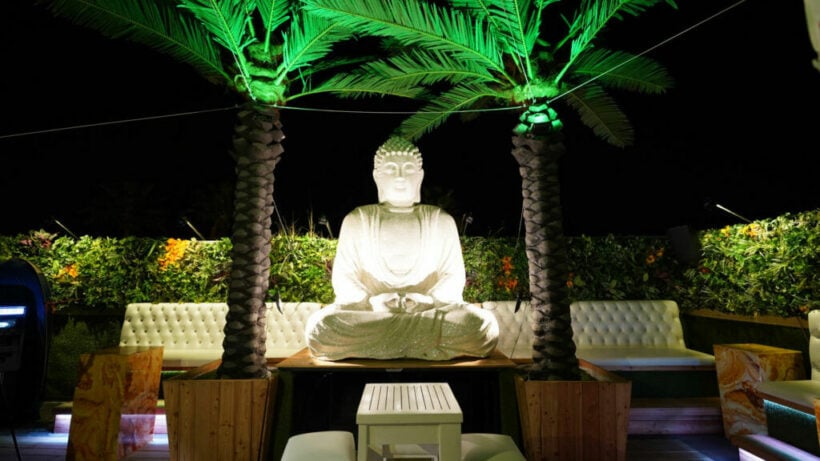 Americans tend to misuse the Buddha image, but a nightclub in Tampa, Florida has taken it too far by placing a giant Buddha statue at its rooftop bar, allowing drunk people to sit and pose for photos, and even jump off on the statue. Businesses play an important role in society, and when they misuse a religious figure or image that is highly respected in other countries, it can lead to widespread ignorance and misconception.

If you’ve been in Bangkok, you’ve likely seen some of the billboards by the Knowing Buddha Organisation put up to educate foreign tourists that Buddha is not for decoration and tattoos of the Buddha are extremely inappropriate. Some tourists in other Southeast Asian countries have faced arrest and deportation for having a Buddha tattoo, unaware it is illegal and extremely inappropriate to have the Buddha image on their body. Knowing Buddha says “the world has gone too far in using Buddha images wrongly, with lack of consideration.”

The Tampa nightclub is just adding to the misconception and leading to more cultural unawareness. Go go dancers posed in front of the Buddha in a photo posted on the club’s Instragram page. One woman at the club sat on the Buddha as she chugged a bottle of what appears to be champagne. Another woman posted a photo of her basically in her underwear sitting on the Buddha statue and wrote the caption “Pray to your goddess.” 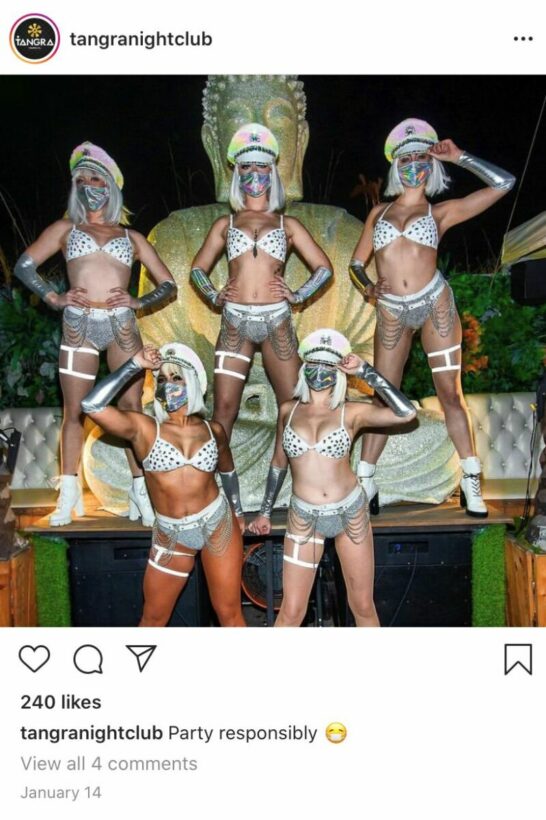 Tangra Club is in Ybor City, a historic Cuban district in Tampa known for its wild and eclectic nightlife. It’s got just about everything for everyone – numerous drag shows, both male and female go go dancers, dive bars, raves, craft beer bars, Cuban cigar lounges, a Coyote Ugly bar, night clubs with music of all the popular genres, even a fetish club.

Right in the beating heart of all the madness is Tangra Club with a giant, sparkling statue of Buddha sitting in the meditation pose at the club’s “Paradise Rooftop Bar.” If you want to talk about misuse, well that’s it.

The “Super Bowl streaker” even hit up the club the other week and jumped off the Buddha before taking off his shirt, revealing the same pink one-piece he wore when he ran nearly-naked across the football field, interrupting the Super Bowl game between the Tampa Bay Buccaneers and the Kansas City Chiefs.

The #SuperBowlStreaker back it again at the Bucs private celebration party ??‍♂️?

The Buddha looks like it’s become a logo for the club. They even put an eye patch and Mardi Gras beads on a graphic of the Buddha with pirate ships in the background on a promotional post for its after party for Gasparilla Pirate Festival, an annual parade and reenactment of the pirate invasion by local legend Jose Gaspar. Basically a pirate-themed Mardi Gras. The caption said “Our Buddha is Gaspy ready…Are you?” One commenter even asked “Do you have a name for your Buddha?” 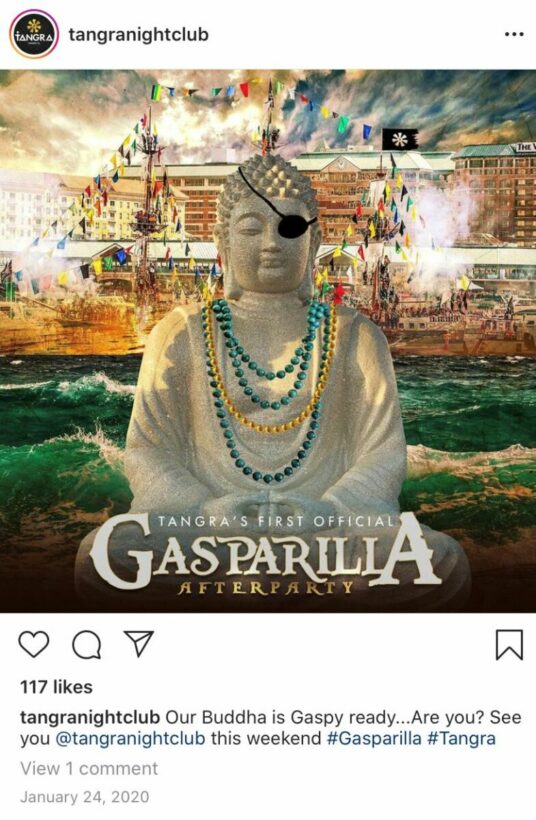 On the club’s website, it says the Tangra’s “multi million dollar renovation will feature pieces & furnishings made #EXCLUSIVELY for Tangra Nightclub by European artists, architects and craftsmen.”

If the Buddha statue was done by a highly paid artist, you would think at least one person would have done a little research… like a quick Google search. Instead they’re just cashing in on a trend they don’t seem to understand. And in America, Buddha is in fashion.

For the American “millennial hippie” (that’s what I’m calling them), Buddhism seems to be based on meditation and opening the “third eye.” And a lot of Americans don’t even get into Buddhism until they’ve tripped on acid a dozen times and decided to start on some psychedelic path to what they think is “enlightenment.” There’s even Buddha ecstasy pills and Buddha LSD blotter sheets. (Google it.) Take what you want from other religions when exploring your spirituality, but don’t put Buddha on a blotter sheet.

Americans who are into “Buddhism” often say they’re “spiritual, but not religious” and that Buddhism is actually a “philosophy, not a religion.” (I guess that’s why no one cares about breaking the no drugs and alcohol rule.) An associate professor for religious studies heard the same thing and wrote an article about it for the website The Conversation called “Why so many Americans think Buddhism is just a philosophy.”

Other Beat poets, hippies and, later, New Age DIY self-helpers have also paradoxically mistaken Buddhism for a kind of self-indulgent narcissism, despite its teachings of selflessness and compassion. Still others have commercially exploited its exotic appeal to sell everything from “Zen tea” to “Lucky Buddha Beer,” which is particularly ironic given Buddhism’s traditional proscription against alcohol and other intoxicants.

With the lack of travel over the past year due to the pandemic, it’s likely that the cultural divide will only grow. Based on the Tangra Club’s Instagram, it looks like they’re only adding to cultural ignorance among Americans.

Caitlin Ashworth is a writer and editor at The Thaiger. Her opinions are her own and do not reflect the views of The Thaiger staff.