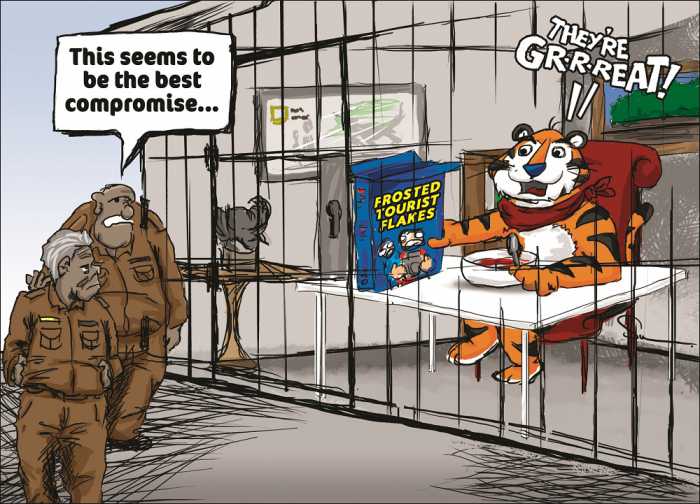 PHUKET: It comes as little surprise that the mauling of Australian tourist Paul Goudie at “Tiger Kingdom” in Phuket drew unprecedented interest (story here) from readers across the globe.

Humankind’s innate fear of big cats – as well as the dearth of such attacks in recent decades – makes it the kind of incident that really moves the needle in today’s media.

As the American comedian Louis CK once observed, humankind does not seem to fully appreciate the luxury it enjoys for having removed itself from the food chain.

For the vast majority of the world’s 7-billion-strong-and-still-growing population, the chance of being killed as prey is about as remote as being struck by a bolt of lightning or winning the grand prize in the lottery: virtually nil.

The attack on Mr Goudie serves as another stark reminder of just how quickly and dramatically our relationship with our former predators has changed. One hundred years ago, it was very much the fashion among the idle rich to go “on safari” in Africa and see what type of “big game” they could hunt down, kill and be photographed with. Other expeditions served to snatch creatures from the wild to be used as performers in circuses and other such spectacles – including as props in places like Soi Bangla.

Yet whatever the trend has been over time, there are always mishaps – such as when magician Roy Horn of the hugely-popular Siegfried & Roy act was bitten in the neck by a white tiger during a performance in Las Vegas in 2003.

The tiger has lost well over 90 per cent of its range globally. They are certainly extinct in Phuket, as well as most of Thailand, with the exception of a few wildlife preserves. They have been spared the depredations of poachers – at least for now.

Despite the worrisome situation on the ground, the desire to be photographed with these majestic creatures somehow endures.

Unfortunately, the attack on Mr Goudie is just the latest in a string of sad mishaps at privately run zoos in Thailand, many of which have developed a well-deserved reputation internationally for animal rights abuses – almost all directly driven by greed.

There is, of course, an argument that zoos, for better or worse, remain one of the tiger’s last refuges as mankind’s expansion and subsequent rape of the environment further encroaches on the habitats of endangered species – on land and in the sea.

If we want to continue to share the planet with them in this sad sideshow fashion, we should at least allow them some semblance of life in the wild.

There are a few zoos in this country that seem to place some value on animal welfare, such as the government-run Songkhla Zoo. Many private zoos in Phuket fall far short of the mark.