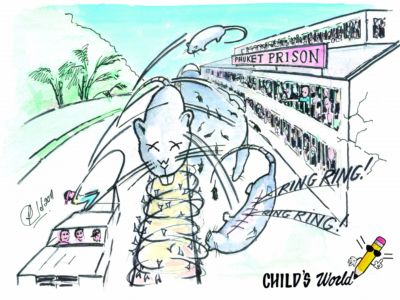 PHUKET: The fact that persons unknown recently enjoyed success smuggling ya ice (crystal methamphetamine) and mobile phones into Phuket Prison by concealing the items inside dead rodents may have a comic aspect to it, but the revelation reflects a serious problem with the security situation – if not the hygiene – at that facility.

The problem of smuggling at an overcrowded prison is by no means unique to Phuket. Prison inspections nationwide typically yield large caches of contraband, mostly cell phones and methamphetamines.

The Phuket Gazette understands why mobile phones are so highly prized among those cut off from general society, but it is hard to believe that any of the more than 1,500 inmates crammed into the six-rai prison could surreptitiously acquire, use, recharge and pay monthly service bills for these devices without a little help.

The very same mundane tasks can be problematic enough for people on the outside.

The Gazette also appreciates the straightforward manner in which prison director Rapin Nichanon admitted to the scale of the problem, but we’re nevertheless troubled by the thought that such a situation could exist if some small percentage of the wardens at the prison were not somehow involved, even if just by failing to notice what’s going on.

Hopefully the current installation of more CCTV surveillance cameras will shed light on how these problems have been allowed to persist.

As for the other contraband of choice, methamphetamines, it is much harder to understand why inmates continue to generate such demand for the drug that put so many of them behind bars in the first place. One would expect the last thing an inmate would want to do would be to “ramp up” the prison experience, or further exacerbate the social tensions that develop with confinement of so many felons in such a small area for such a long time.

Then there is the inevitable “crash” that ensues when the drugs wear off. Given the conditions inside, one might reasonably expect that antidepressants would be the drugs most sought out by inmates.

Society generally prefers to remain ignorant of what goes on behind prison walls, but the overcrowding at Phuket prison, coupled with the availability of communications technology and powerful stimulants, is a combination worthy of public concern.

There have been no reports of serious unrest at Phuket Prison in recent years, but never has it been so overcrowded. Keeping the population there free of meth and mobile phones is the best way to keep the peace. So we wish the wardens every success in the ongoing game of cat-and-mouse.