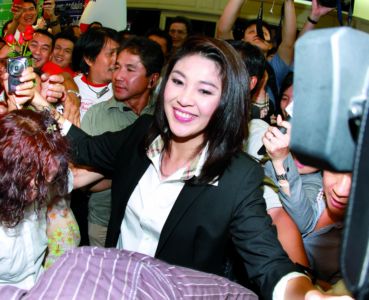 PHUKET: The landslide election win by the Pheu Thai Party last weekend may strike fear in the hearts of some Phuket residents, but the new coalition government should be given a chance to establish itself and make good on its promises to bring about national reconciliation and prosperity.

Key things to look out for in the short term are the number of red-shirt leaders who are rewarded with prominent positions for their behavior in the capital city last year, and the theatrics that will presage amnesty proceedings to bring back fugitive former prime minister Thaksin Shinawatra.

Even more interesting will be the extent to which the charismatic but inexperienced Yingluck is allowed to guide policy on her own. Shortly after her win was announced, her brother-in-exile was giving interviews on state-run television from Dubai.

Although unintentional, the Orwellian images of Big Brother’s talking head towering above the TV anchorman was sure to give some viewers a feeling of déjà vu, conjuring up memories of chilling periods in recent history, like the daily assassinations that marked the early stages of Thaksin’s notorious 2003 War on Drugs.

There are reasons for optimism, however. News of the Pheu Thai election win was met with an immediate surge in the SET index, reflecting widespread investor confidence, particularly from overseas.

For Phuket, with its make-or-break tourism industry, it is better to have a stable national government than a collection of embattled ministers attempting to cater to our needs from a burning platform of chaos in the capital.

Though inconvenient for most in Phuket, a look at the achievements of the departing Democrat-led coalition government highlights this fact.

This was a period when Phuket had unprecedented representation at the highest levels of power, with three sitting MPs including party list representative Chalermlak Kebsup; Anchalee Vanich Thepabutr serving as secretary to Prime Minister Abhisit Vejjajiva; and Thanyarat Achariyachai heading the senate committee on tourism.

But despite what would appear to have been a golden opportunity, little, apart from the airport expansion project, was done to improve the infrastructure or sustainability of Phuket tourism.

National regulations damaging the industry, like the myopic ban on foreign tour guides, and even the bemusing alcohol control rules, pub closing times and other ‘social engineering’ trivia put in place under Thaksin, should have been swept away.

We would like to remind our newly-elected MPs as they enter the opposition that their job descriptions call for assistance in the formation of national legislation and government policy – not involvement in the purely local issues, like the drug problem in Pa Khlok or traffic congestion in Phuket Town, that were the focus of their campaigns.