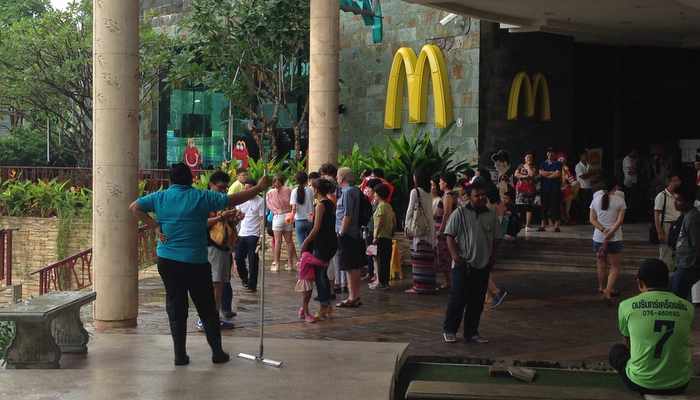 PHUKET: Let me set the scene for you: it is Sunday afternoon and a sizable rainstorm has just swooped in and killed the power at Central Festival. The only sources of light are provided by the gray sky and the fluorescent glow emanating from laptop screens, tablets and smartphones.

I am sitting in front of my Mac at a table in the back corner of Starbucks and my friend is sitting next to me, hunched over her slightly bigger Mac furiously typing up a university exam with a swiftly approaching due date. I thought about getting another coffee, but the monsoon has forced inside a crowd of shoppers looking for a hit of caffeine to pass the time.

When I walk outside to assess the situation, I sense a dystopian dreariness in the air as people confused and disoriented by the sudden power outage stand under cover with arms crossed, barely protected from the rain, and stare out at the sky. No one seems to know what to do.

Staffers are standing at their store entrances, chatting quietly and seeming pleased to have a quick break as temporarily blinded shoppers wander out of the pitch-black stores toward the light.

The worst of the storm passed after about 20 minutes. Right on cue, mall staff wielding squeegees emerged – ready for battle. Puddles of water are pushed to and fro and a few unsuspecting walkers get splashed as they pass by. Squeegee soldiers on the second level force water over the edge of the landing, creating a sort of man-made waterfall as they go along.

The chaotic situation outside eventually settles down, so I make my way back into the still-dark Starbucks. I had been secretly hoping while I wasted time watching the water wars that the line of customers inside would die down, but it had stayed long, so I bypassed coffee yet again and sat back down at my corner table.

I was just starting to think that we were in for a long haul blackout when the lights clicked back on and the air con started blasting again. Everyone in Starbucks cheered and breathed a collective sigh of relief.

My fellow coffee addicts and I got back into a well-lit groove as the storm – which had just entered Act 2 after a short intermission – raged on outside.

There really isn’t much you can do when a storm hits except ride it out. Power outages are bound to happen and inconvenient situations are highly likely. To all those people who aren’t sure what to do in such cases, keep in mind that people-watching opportunities are excellent.