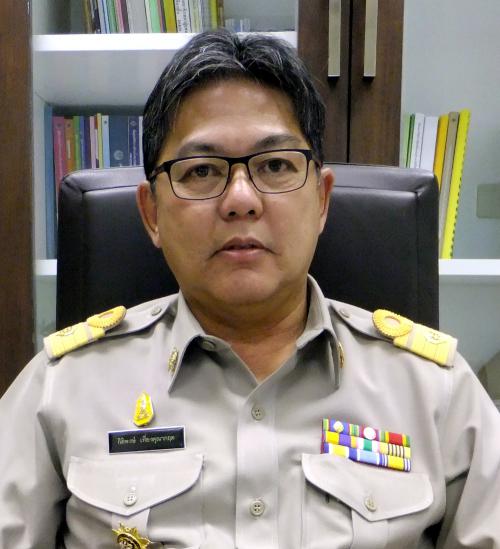 Kittipong Thiengkunakrit, 57, has been the Director of the Phuket Election Commission for three years. He has a science degree from Prince of Songkhla University, an advanced diploma from the University of Paris and a master’s degree in public administration from the National Institute of Development Administration. Mr Kittipong is a lecturer on how to run elections, election law and how to support democracy.

Here, he talks about how to bring an end to vote fraud, especially the selling of votes.

PHUKET: I know that votes are bought in Phuket; in fact, a lot of votes. And I know that the price of a vote is anywhere from 500 to 20,000 baht. Sometimes my officers even see votes being bought, but it’s very difficult to get enough evidence to make an arrest, because the buyer and seller are in collusion and neither will admit what they are doing.

Since it’s difficult to arrest the people buying votes, the best thing to do is try to stop people from selling their votes.

The most important thing for vote-sellers to realize is that they are not really coming out ahead. It might seem so because they get money for the vote, but in the long run they will pay. Nothing comes for free in this world.

Let’s say for example that Mr A wants to win an election and pays 1,000 baht to 1,000 voters to do so. For sure he’s going to want to recoup the million baht he spent.

He is likely to do this in ways that directly affect the people who sold their votes and the rest of us too. For example, if he has control of a construction project for a bridge, road or airport, he’ll cut corners or make some deal with the contractor to make money, and we will end up with an inferior product.

Phuket people need to think carefully about vote selling. Nowadays we say we want to make the island a special administration zone and elect our own governor. What’s going to happen if we allow a future governor to buy our vote? Once in office, he would be in charge of billions of baht of our tax money. Is a vote-buyer someone you can trust to handle that money well?

My office is making an effort to educate people about the hidden costs of vote selling. We don’t educate indiscriminately. Essentially, we break the population down into three groups and spend more time and effort with the groups we think we can convince. The three groups are adults who have been voting for a while, pre-voters and new voters – 18-year-olds. Which group do you think is our prime target group?

It’s the 18-year-olds, the ones who are going to vote for the first time. They are very excited and impressionable because it’s their first time, and if we can direct them in the right way, we believe we’ll help them establish a lifelong habit of doing the right thing.

The second group are people still too young to vote, those 17 and under. We can teach good habits to this group while they’re still in school. For example, we can use student elections to teach them. Ideally, this group will never be tempted by vote fraud or corruption.

The third group are adults already voting. We don’t hold out much hope of influencing this group because they already have set habits and morals – it’s hard to change these. In Thai we call these people “lotus flowers underwater”. That means they are ready for the plucking by vote-buyers.

In order to end vote buying, we have to stop vote selling. The way to do this is to get people to understand the negative impact of selling their votes and to appreciate that we each have an important role to play in making our country corruption-free.