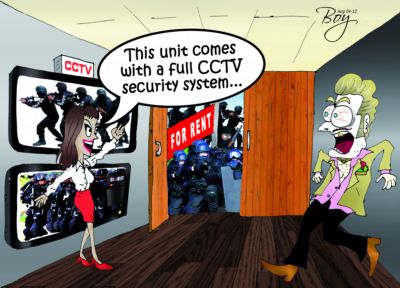 PHUKET: The recent arrest of Belgian murder suspect Marc De Schutter is the latest in a series of events that have kept Phuket in the international spotlight. (See front-page story, current issue of the Phuket Gazette. Digital subscribers click here to download the full newspaper.)

The De Schutter arrest also highlights the need for a more savvy approach by authorities to prevent criminals, both domestic and imported, from trying to establish themselves here.

Although the Tourism Authority of Thailand would be loath to admit it, Phuket has just about everything a criminal on the lam could ask for: generous immigration rules for new arrivals; a wide choice of accommodation; a relatively low cost of living; and, perhaps, greater opportunity to obstruct justice than might be the case in some other countries. With its large expatriate community and millions of foreign visitors every year, Phuket is a place where just about anyone can blend in – whether from Novosibirsk, Nairobi, or Nakhon Nowhere.

While some metropolises may boast a similar cultural mix, few have nice beaches and clean air. Perhaps it won’t be long before Phuket supplants Mexico as the preferred shooting location for the final scenes in Hollywood movies, when the likable diamond thief is seen relaxing on a beach, pina colada in hand.

For better or for worse, humans have an innate tribal tendency that manifests itself in a desire to congregate among those who share a common language, culture, nationality or other magnetic attribute.

The same is true of domestic transplants. Although most foreign residents are probably unaware of it, there are many large associations of people from other parts of Thailand here in Phuket, and it’s important that these networks be put to better use in the fight against crime.

Recent statistics are troubling. There was a 72.3% increase in heinous crimes in Phuket during the first half of this year compared to the same period last year. While comparison of the absolute number of crimes is not statistically significant, the apparent potential for growth in violent crime is unacceptably high.

Police are quick to herald closed-circuit television (CCTV) as our savior in the fight against crime, but while CCTV imagery has helped investigators bring many criminals to justice, it is not nearly so effective as a deterrent – just ask the families of murder victims Michelle Smith, Sunisa “Nong Som” Saiyoy, Rungnapa Suktong, or Wanphen Pienjai, to name a few.

In the final analysis, CCTV will never replace intelligence as the key to crime prevention. If the Royal Thai Police are really serious about reducing violent crime, they need to create a better working relationship with local residents, Thai and foreign alike.

A good start would see some decentralization in the police force and a change away from the ‘shuffle-them-in, shuffle-them-out’ regimen that makes it so difficult for ranking officers to establish ties to the local community. Nowhere has this failing been more starkly highlighted than in the Deep South, where violent attacks have claimed the lives of at least 16 people in recent weeks.