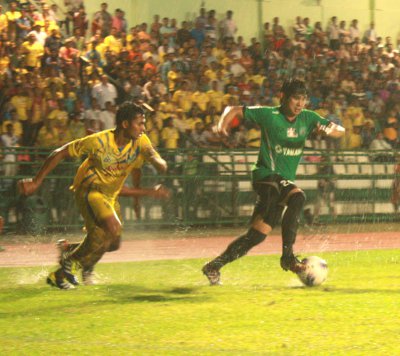 PHUKET: Die-hard Phuket FC fans will be heading across Phang Nga Bay tomorrow to cheer their side in a southern derby against premier league hopefuls Krabi FC.

Kickoff for tomorrow’s match, to be played at Krabi Provincial Stadium, is at 6pm.

The 6,000-seat capacity can fill up pretty quickly; those seeking good vantage points should get there at least an hour early, or risk standing for the entirety of the match.

With refined form, a new coach and a handful of promising new signings, the Islanders are looking for revenge following their 0-1 loss to Krabi at Surakul Stadium in Phuket on July 7.

Phuket will also be looking to redeem themselves following their last match, a disappointing home loss to PTT Rayong last Saturday.

Krabi, in third place of the 18-team Yamaha One League standings, will be gunning for a win to maintain their spot in the three-team promotion zone of the table.

Indeed, the high-flying Andaman Eagles have been sound at home, where they have won seven matches and drawn twice. Their only home loss came on July 25, when the Royal Navy beat them 2-1.

Among the Eagle’s proudest home triumphs this season was a 1-0 win on June 13 against Ratchaburi Mitrphol FC, when Krabi dealt the league leaders their only defeat of the season thus far.

In other team news, Phuket’s star Brazilian keeper has informed the Gazette that he has been asked to play on the Thai League All Stars team, who will be matched with the Thai National Team in a friendly in Bangkok on August 15.

The Thai League All Stars will comprise the best foreign talent playing in Thailand’s professional leagues.

“I am very honored to be asked to play in this match,” he said.

Alonso was not sure whether he would be fielded in tomorrow’s match against Krabi, however.

“I am ready to play, but it depends on the coach,” he said.

Note to those travelling to watch the match:
Krabi Provincial Stadium is located just off Sri Trang Road (Phetchkasem Highway) in the north part of Krabi Town.
Other Yamaha Division One matches this weekend:

Korat Boy, 14, dies after crashing into parked truck in Phuket