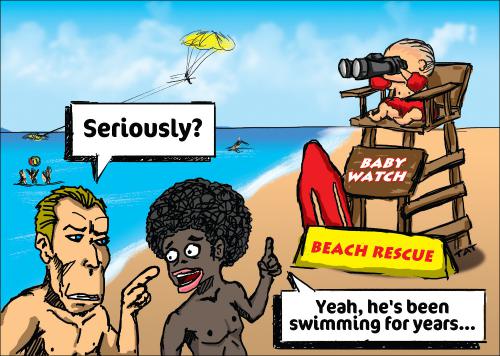 PHUKET: Much has been written about water safety in this space over the years. However, with a focus on maritime accidents and tourist drownings, we have neglected the troubling issue of the island’s children not being properly taught to swim, as a series of heartbreaking tragedies in recent weeks indicates (story here and here).

As the only “naked ape”, there can be little doubt that humankind’s unique ability among primates to master swimming has been an important, yet often overlooked, element of our evolutionary success.

Swimming, along with a host of other advanced cognitive and physical abilities, is best developed from an early age. There is considerable evidence to indicate that our brains our “hardwired” to pick up swimming naturally at about the same age we learn to walk.

However, lack of natural exposure to water during these years often ends much the same as an eye deprived of light during formative years – it fails to develop.

Learning to swim is like learning a language, the longer it is put off the harder it is.

Many organizations dedicated to child safety, such as the American Society of Pediatrics, now say that children as young as one year of age can benefit from informal swimming lessons. Studies cited show a decrease in the odds of drowning deaths, even in this age range.

However, the benefits do not stop there. Research led by Griffith University in Australia last year revealed that children who can swim also demonstrate more advanced cognitive and physical abilities than their non-swimming peers.

The children in the study were anywhere from six to 15 months ahead of the normal population when it came to problem solving in mathematics, counting, language and following instructions.

On Phuket, children are exposed to open water far more often than their counterparts in most other places in the world. In addition to our beaches, there are tin mine ponds, canals – not to mention thousands of swimming pools, few with lifeguards.

Unfortunately, there are only a handful of schools on the island that include swimming as part of their physical education program, and even in these cases the methods of instruction and time of exposure to water are often inadequate.

Most drowning deaths are the direct result of panic, so the key to avoiding them is confidence, which is the product of success over time. In fact, if people simply had the confidence to float in water over their heads, it would prevent the vast majority of drowning tragedies that are chronicled so often in these pages.

Parents need to consider the rewards of teaching their kids to swim from an early age. The cost can be as little as a weekly trip to a local beach, and in this regard we are truly spoiled for choice.