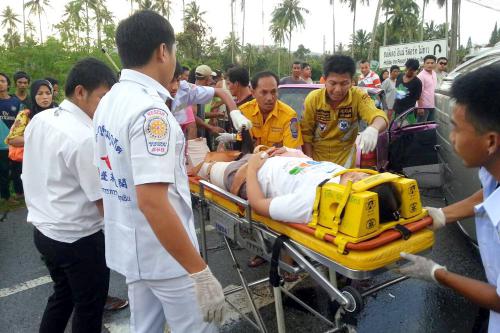 Early last Saturday morning, a female tourist spent 45 minutes trying to contact the police. Repeated calls to the Tourist Police hotline 1155 went unanswered until a man picked up and told her he could not speak English and advised her to call the Thalang Police, who put her on hold.

The Phuket Gazette’s Chutharat Plerin investigates emergency services for tourists on the island.

PHUKET: Phuket’s Tourist Police have campaigned time and again with the message that the one emergency number any tourist needs to know is 1155. However, when that number was put to the test last weekend, the results were dismal.

“For the past 45 minutes, I have tried to contact the police. I tried the Tourist Police first, but the man who finally answered the phone told me to call Thalang Police as he didn’t speak English,” according to ‘Angel’ (not her real name) in an email to the Gazette received at 1:47am.

“So I called the Thalang Police – again with no answer to my repeated calls. When I did get through, they put me on hold and never came back” she said.

Angel then reverted to calling the Tourist Police, but no one answered the phone.

“Luckily, I wasn’t in any danger, but I am disgusted and appalled by the lack of response by the police.

“Aren’t the Tourist Police supposed to speak English? If I am in danger, who do I call? Certainly not the police in Phuket,” she said.

“I am unaware of this incident and will look into it,” he assured.

“Any calls to 1155 from within Phuket are automatically directed to our Phuket ready room. If you are in Phuket, you will reach us.”

Maj Urumporn wondered why any of his officers tasked with answering the hotline would say they could not speak English.

“We have at least two officers on standby to answer the hotline 24 hours a day. These officers all speak at least reasonable English. So I have no idea how or why this could have happened,” he said.

To help Tourist Police with foreigners whose native tongue is not English, the ready room keeps a list of contact numbers of Tourist Police Volunteers who can assist with translations in 14 languages.

“Tourist Police have 36 foreign volunteers from 16 countries and 18 Thai volunteers. They can’t attend to the phone all the time, as many of them are out assisting patrols on the street, but we can call them and ask for their help in communicating with tourists in need,” Maj Urumporn said.

First and foremost, tourists need to know that the hotline exists, he explained.

“That’s why we have posters displaying the 1155 number at the airport and at the front desk, or even the guest rooms, of many hotels,” Maj Urumporn said.

It was information available at the airport that saved a French family lost in the forest just a month ago (story here).

“We realized we were walking into a forest, but we didn’t understand how difficult the going would be,” said Bill Letshon, 56, who was hiking with his three daughters.

“[When] I realized that we were lost, I remembered the Tourist Police hotline number from a brochure at the airport, so we called them for help.”

The Tourist Police last year launched its free Tourist Buddy smartphone app. The iPhone and iPad app is available for download on iTunes, and the Android version is available on Google Play.

When users first launch the Tourist Buddy app, they are asked whether or not they want the Tourist Police to know their location, delivered through the phone’s GPS facility.

“If tourists in danger use the app to call the Tourist Police hotline, we will know exactly where they are [within 10 meters] and will be able to go immediately to the right location to help,” Maj Urumporn said.

No matter what the emergency – requiring police, ambulance or fire brigade – 1155 should be the first number any foreigner in distress should call, Maj Urumporn urged.

“If tourists need to speak to an officer in person they can go to the police box at the beach end of Soi Bangla in Patong or come to our headquarters in Phuket Town.

“The local police emergency number, 191, remains the top-priority number for native Thai speakers, but not all of their officers can speak English.”

Although all calls for medical assistance made to the police hotline 191 will be directed to Phuket’s Emergency Medical Services (EMS) ready room, EMS nurse Ladda Thongtan agrees that foreigners should call 1155.

“We have our own hotline, 1669, but most people call 191 and any calls requiring an ambulance are put through to us,” she said.

“We have staff who can speak English, but they are not native speakers and might not understand a person in distress if they do not speak clearly.

“If people need an ambulance, it can often be a matter of life or death, so the sooner we have clear information the faster we can get an emergency team to you.”

Ms Ladda explained that the Phuket EMS ready room will contact the nearest hospital to the scene of an accident to dispatch an ambulance, or contact one of Phuket’s rescue foundations if they are closer.

The Kusoldharm Foundation covers Phuket Town, Patong and Thalang, while Ruamjai Kupai covers Chalong, Rawai and the south of the island. Both have rescue teams on standby 24 hours a day, but both admit that their English-speaking skills are limited.

“We have staff who can speak some English available 24 hours, but it is best to have a Thai speaker on hand so we can understand exactly what is needed.”

“Our number is 076-283346. We have some staff who can speak English, but they are not on duty round the clock. If you need help, we suggest you call the Tourist Police or EMS first,” he said.