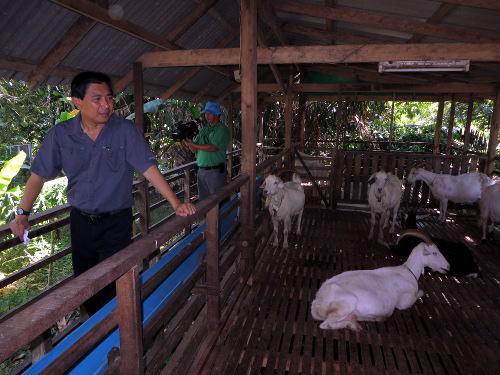 PHUKET: Goat meat and milk produced in Phuket could provide local farmers with up to a million baht in annual revenue, the governor has estimated.

On Tuesday, Phuket Governor Maitri Inthusut and Vice Governor Sommai Prijasilpa led officers on a tour of Akarah goat farm in Baan Pru Cham Pa in Thalang and discussed the future of the goat industry with goat farmer Akarah Thitithaworn.

The impending government financial stimulus, of an undisclosed amount, for the goat industry is part of Gov Maitri’s vision to promote agricultural tourism in Phuket.

“This is a different way to generate income for Phuket. I am now considering adding the goat industry plan in the 2015 strategic development budget that would help local people improve their businesses,” he added.

In the past, Phuket’s goats were only raised for their meat since they did not produce milk. Now, the goats can produce milk as well.

“Dairy goats at the Akarah farm are a mix of imported dairy goats and local goats,” said Gov Maitri.

“Akarah farm could generate over 730,000 baht a year income from the milk of 30 goats and an additional 330,000 baht from the sale of dairy goats. There was a long queue of booking, more than a year, from farmers in other provinces to reserve Phuket goats,” Gov Maitri told the Phuket Gazette.

“I want to promote the milk from dairy goats in Phuket as the best quality goat milk in Thailand; that would be attractive to people in other provinces, including tourists, and would focus on Phuket’s goat industry for the future,” he concluded.

Governor Maitri said he was well aware of the impact of the burgeoning tourism industry on Phuket’s natural environment.

The governor’s aim for the Phuket of tomorrow sees the two major economic industries, tourism and agriculture, not only striking a delicate balance, but joining together in a symbiotic relationship where agricultural tourism plays a more prominent role.

He said that if tourists are able to learn about the different types of agriculture on the island, they will be more inclined to support the preservation of the natural environment.

According to an infograph recently published by the Phuket Index, there are 46 goat farmers in Phuket, 90% of which are based in Thalang, raising a total of 1,672 goats.

A rescuer: Ultralight engine did not explode in fatal Phuket crash

Special Report: If there’s something strange and it don’t look good”¦ who ya gonna call?