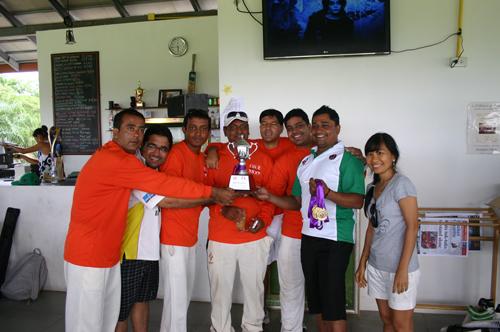 The PCG had earlier defeated both Wolfpack and the CBB’s in two exhilarating finishes, but they had no answer to the batting of ‘Player of the Final’ and ‘Player of the Tournament’ Jack Joy, who retired on 30, and Scott Maitland who closed the game out with two enormous hits as they chased down 59 in the final showdown.

The Bowl remained on Phuket as the local Dabangg Boyz overcame the Galah CC of New South Wales after they posted 41 after some economical bowling. The Boyz won with just four balls to spare thanks to a fine innings from Sameer Khan who was crowned Player of the Final.

There was plenty of other fine play on show throughout the day, as well as many fine moments that highlighted the fun side of an ACST (Asian Cricket Sixes Tour) event. Play had gone ahead an hour earlier owing to the previous days rain.

The Player of the Day awards went to Jeremy Smith of the ACST side who took 2 for 6 in one over and to Neil Quail of the PCG for a fine all round performance.

ACST Chairman Michael ‘Cat’ Maher awarded the coveted Spirit of Cricket Award to Garry Rowe of the Galahs for his brilliant attitude both on and off the pitch, which was typified when he donated his playing kit to Pao, a local youngster and guest player.

In closing Mr Maher said how special it had been to play cricket on Phuket at a world class venue, and thanked the Kata Group and all the other sponsors and officials who had made the tournament possible.