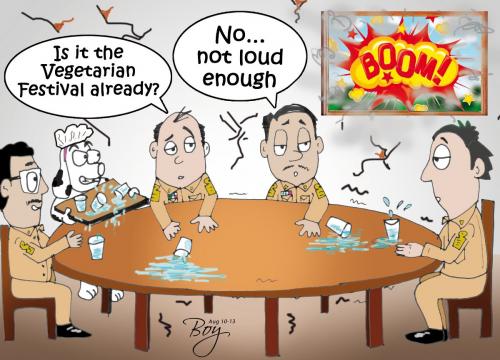 PHUKET: News of the the unprecedented bomb explosion outside of the Phuket Provincial Administration Organization (PPAO) offices on August 1 (story here) came as just the latest blow to the reputation of Phuket as a safe tourist destination. Fortunately, nobody was physically harmed in the incident, though a number of vehicles were damaged.

While the bombing itself was as completely unexpected as the 2004 tsunami disaster, the reaction to it by officials at Provincial Hall was nevertheless predictable; they were quick to downplay its significance, speculating that it was meant to intimidate, rather than cause injury or death.

Evidence collected at the scene would appear to support such conjecture, but until a complete investigation is carried out, downplaying this troubling incident is premature.

Terror attacks involving improvised explosive devices (IEDs) tend to come in spates. Those responsible – whatever their motives – tend to use them more and more as their “expertise” increases along with their sense of impunity.

Anyone unconvinced of this fact should review the trend in the three southernmost provinces, where hardly a day goes by – even during Ramadan – without a terror attack involving IEDs, despite elements on both sides of the conflict having agreed to an informal truce during this, Islam’s holiest, month.

On the topic of the Deep South, many online posters were quick to link the bomb in Phuket with events in Pattani, Yala and Narathiwat.

While reserving final judgment until results of the police investigation have been revealed, we find it highly unlikely that the August 1 bomb could be directly linked to the conflict in the Deep South.

Fear of such an attack has understandably been the single greatest concern among tourism industry analysts since that conflict began to spiral out of control under the misguided hardline policies of former PM Thaksin Shinawatra.

But in reality, there are so many conflicts of vested interest in Phuket at the moment that the number of possible motives is already enough to give conspiracy theorists plenty of entertainment.

That said, there has been much discussion lately about establishing the three troubled provinces as a special administrative zone, where citizens elect their own governor, in the same fashion as Bangkok and Pattaya. If and when such a bureaucratic effort gains momentum, the Thai Government should do the same for Phuket.

The current “shuffleboard bureaucracy” is clearly not working on this island any better than it is in the Deep South. The August 1 bomb is only the latest reminder of this bleak and obvious fact.

Phuket Opinion: The road not taken