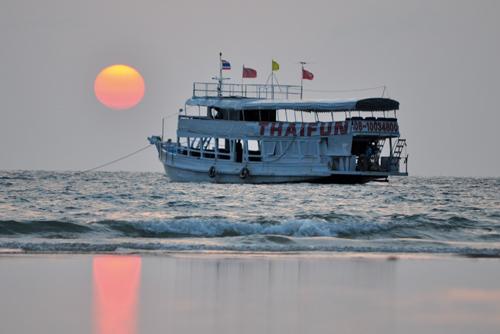 PHUKET: The obsession with light colored skin in Phuket and Thailand among Thais has led to a boom in many industries, most notably cosmetics, where a variety of skin-whitening products, from deodorant to face cream, are readily available. In at least one industry, however, this aversion to the sun has created an incredible lack of local staff and entrepreneurs – diving.

Despite the additional overhead, the dive industry in Phuket continues to be dominated by foreigners, both as the forces behind start-up dive companies, as well as dive professionals in the water.

A notable exception is Kritsada “Bank” Nikrothanon of Kata Scuba. Spending much of his childhood in Bangkok, Vietnam, Cyprus and the UK has given Bank enough distance to clearly examine why there is such a lack of Thai diving professionals in Phuket, and why the local Thai diving market is still just a fledgling.

“There aren’t a lot of Thai divers. The reason for that comes partially from Chinese culture, the fear of getting black I think you know, is quite prominent,” Bank explains. “Children are not encouraged to go outside and do activities. They are encouraged to sit at home and study that is the definition of a good child.”

“I believe that they are taught to study more, and thus have less time to be kids, especially when compared to European kids, who have more time to play and are encouraged to do sports. And at the end of the day, the Thai kids, when they graduate, still have a lower income job than their European counterparts.

“If they [Thai children] go out to the beach, their mum or dad will say ‘you go and you will get black and get burnt’ and that lowers the status for the family,” Bank says.

Unlike in many other industries, those who pursue entrepreneurial roles in the dive industry are people who have an active interest in the basics of the industry. And though there are exceptions, it is rare to meet dive shop owners who are not, or have not at one time, been professional divers.

Once Thai nationals have had their curiosity piqued by the unfathomable wonders that lie below the water’s surface, and have crossed that cultural line, there are still more hurdles for them to jump.

Language [is a problem] if they want to go after the European market,” Bank says, pointing out that the nascent Thai diving market is still too small to be worth chasing after.

Nonetheless, he is trying to change that.

We need to raise the awareness of the kids. We need to encourage them to be interested in nature,” he says.

Bank still remembers the vibrancy of the stunning coral reefs that once thrived along Phuket’s shorelines, disturbed by development. Part of Bank’s childhood was spent at his family home on Kata Beach, where he first got his PADI Junior Open Water certification at the age of 12.

“I remember there used to be nothing here, behind the house, there was nothing just water buffalo,” he says, sitting in front of the family house turned dive shop.

Children are the key to the future of Thais making a splash in the dive industry.

“Schools are the best places to start,” he says.

“It might just be a matter of getting the parents and teachers in one room and explaining what’s happening…what the kids will learn, why it is important.”

Despite the current dearth of Thais both as professional divers and as paying customers, there is little doubt that there is a tremendous amount of potential in the country.

The key is the change in mentality, and Bank believes that the change is coming, though perhaps slowly.

“Traditionally, [cultural values] are pushed out to the general public through television,” he says.

And though Bank doesn’t watch too much local television, he sees a change in the cultural attitude toward outdoor activities.

“There are a lot more [commercials and television shows] with people going out into the sun and people doing exciting activities, so I think the mentality will slowly change. But will it be enough, and happen fast enough to keep up with the rest of the world?”

And though Bank, like many others in the industry, doesn’t know the answer to that question, he hopes that he can at least make a positive difference, and help develop a new generation of Thais willing to brave the sun and splash in to take part in the beauty that lies at their doorstep.

How does your Phuket garden grow?