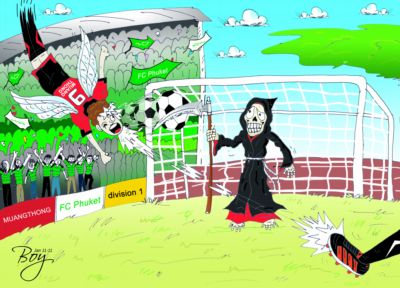 The news also came as a considerable relief to fans, given that the team had been reported “sold” and that its future had been very much in doubt.

The fans’ uncertainty followed a ruling earlier in the year by the Auditor General’s Office that provincial administration organizations would no longer be allowed to use taxpayer money to support member teams of the Football Association of Thailand. This essentially left FC Phuket, as well as some other clubs, without the funds needed to compete seriously at the Division 1 level.

The Phuket Gazette of course agrees that taxpayer money should not be allowed to prop up privately-owned football clubs, as this is an obvious conflict of interest. But we do think that the efforts by the Phuket Provincial Administration Organization (OrBorJor) to build up a fan base were made with the best possible intentions, and that whatever “accounting” of the OrBorJor’s role is forthcoming will reflect this.

The team certainly has come a long way with OrBorJor support. Few among its current supporters were around during the team’s first year, when “Phuket FC” players wore hideous baby blue kits and failed to win even a single home game while playing in the backwater Division 2 regional leagues. One can hardly blame the players at the time for not winning. They typically saw more numerous and vocal supporters backing their opponents, even when playing here at home in Phuket.

Many new fans jumped on the FC Phuket bandwagon over the past year, when the rebranded side enjoyed crowds of up to 20,000 at some key matches during its first year in Division 1. But sadly, this level of support waned dramatically in the final months after the team’s financial woes became known, leaving many to wonder just how much hardcore, grassroots support there was for the team.

Looking forward to next season, the team is now seeking to secure some key new talent to bolster its bid for promotion to the elite Thai Premier League. The alliance with Muangthong Utd should be mutually beneficial, especially given the fact that the team owners also run Siamsport, by far the country’s most expansive sports media network. As such, they are no doubt aware that FC Phuket enjoys the most intensive English-language media coverage in Division 1, if not the entire Thai Premier League.

As the only English-language media organization to follow the team since its inception, and as an ardent supporter of it, the Phuket Gazette looks forward to keeping fans abreast of all the action in the coming year.

Phuket Opinion: Why the muddle with maps?

Phuket Opinion: Thailand’s lethal roads are not a secret