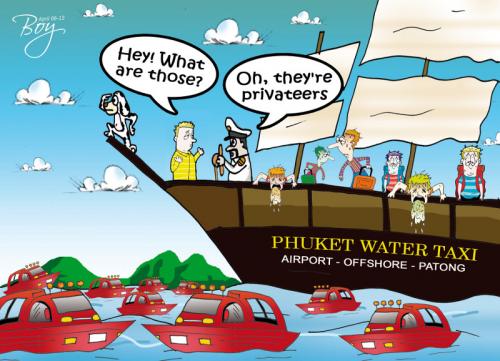 PHUKET: The proposal by the chief of the Phuket Marine Office to launch a “sea taxi” to ferry passengers between Patong and Phuket International Airport deserves credit for innovation, but appears somewhat impractical.

There can be no doubt that visiting tourists need – and fully deserve – better public transport options between Phuket Airport and west coast resort destinations. The fact that Phuket Town enjoys not only an Airport Bus service but also the Po Thong “pink bus” service, is just one reflection of a sad reality: Phuket’s resort areas have developed a reputation among tourists – both foreign and domestic – for being mafia-controlled, rip-off destinations.

No segment of the local economy has done more to earn this dubious distinction than the tuk-tuk and taxi syndicates, which through collusion and thuggish self-entitlement make taxi fares on the island the highest in the country.

The solution to this problem is to deal with the root causes head on, rather than trying to work around them. The sea taxi proposal appears to be a tacit admission that these syndicates are here to stay – with tourists forever at their mercy.

We do not buy into this point. Change is not only possible, but fully supported by both tourists and the vast majority of island residents who are sick of the status quo. It is a huge drag on an economy that, for the most part, offers excellent value.

It always helps to try to view the issue through the eyes of visitors. Sadly, this does not seem to be understood by many of our elected officials and Bangkok-appointed bureaucrats.

Many tourists who touch down at Phuket International Airport arrive deprived of sleep and burdened with baggage after long flights and all the hassles related to Customs and Immigration, security, and so on. All they want to do is get to their hotels safely, at a reasonable price.

We doubt many of them would be keen to board a vessel, (almost surely to be driven by a cowboy), for a half-hour speedboat ride in the monsoon rains. Those prone to sea sickness might be particularly put off by the idea.

Unanswered questions include where they might disembark, as the temporary pier in Patong is only usable a few months a year. And given Phuket’s long and frightening record of mishaps and deaths at sea, how would safety be assured, or even suggested in a brochure?

The solutions to Phuket’s transport woes are self-evident: buses, songthaew, metered taxis and perhaps light rail. The time for change is long overdue; all that is required is a bit of leadership and courage.

Readers might also be interested in the threats cited in the Gazette‘s public transport story, posted late yesterday.

Phuket Opinion: Toothless, but no fairy