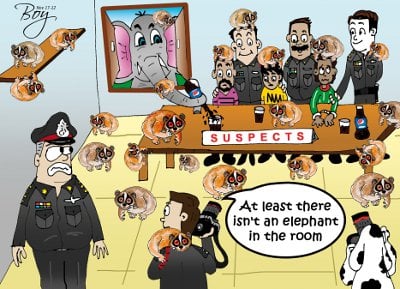 PHUKET: Finally the DNA tests for the three baby elephants seized in Phuket in February are being released, with one toddler being returned to its natural mother, another being returned to the tour park operator (as the elephant was actually deemed legal), and the third yet to be determined.

This ‘dance of the baby elephants’ stands in stark contrast to the constant resurfacing of slow loris touts on Soi Bangla, where they can regularly be found despite the occasional arrest.

The baby elephants were seized without a shred of evidence that they were illegal; suspicion alone was enough. So why don’t police arrest the repeat-offender touts when they are already familiar with the faces of the offenders and the animals involved?

The answer to this lies in the bureaucratic hoops that well-intentioned officers must jump through – and good officers in Thailand love doing things “by the book”.

Police openly admit they need an “expert” officer present to identify the animals used by the touts as true members of a protected species. Also, the head of the conservation unit at the Khao Phra Taew Wildlife Reserve has to apply to Patong Police weeks in advance for permission to lead a raid on Bangla.

But the average citizen doesn’t know this, and most don’t care when it comes to flagrant disregard for the law, and that includes Phuket tourists of all nationalities, long-term expats and local Thais. Without such information being clearly, publicly disclosed, the public is left to its own devices in coming up with a reason for inaction.

Add to this the daily ‘in-your-face’ disrespect for nearly every law or regulation that can be witnessed on the streets of Phuket, and it becomes little wonder that the public generally arrive at the same conclusion time and again – that the police don’t care.

This is where the Tourism Authority of Thailand’s mantra of preserving Phuket’s reputation among tourists, and their confidence in their personal safety, genuinely kicks in. Krabi Tourism Association president Ittirit Kinglek deserves support in bringing to the attention of the Krabi Police the public’s perception of the handling of the rape case of a Dutch tourist.

The silence from police prompted a backlash; incited an angry father to post his “Evil man from Krabi” video on YouTube, where it has now gone viral; and resulted in many room booking cancellations. They had damaged their precious tourism-based economy and they had brought it on themselves.

As the Krabi TAT office pointed out, police often need assistance in getting clear, accurate information out to the public. The Gazette understands this from interacting with the police on a daily basis. Ambiguity and omissions, intentional or otherwise, don’t work.

Like any other organization that has a vested interest in the commercial success of Phuket and its neighboring provinces, the TAT may wish to put its own ‘spin’ on the information it releases. But it cannot be allowed to suppress, omit or otherwise alter facts.

So if the intent of the TAT in Krabi is to use its considerable network of resources to deliver clear information when such is absent, as in the recent rape case, then much will have been gained by the public – and everyone wins.