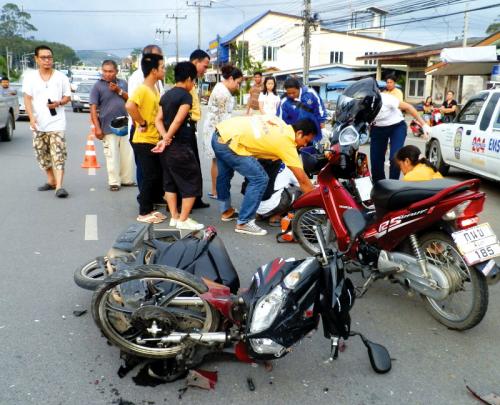 PHUKET: At first I was charmed by Thai driving idiosyncrasies, like motorcycles puttering along on the wrong side of the road. To all those who said “There are no rules”, I said “But there are!” For example, that wrong-way driving motorcyclist knows he had better stay well to the side and go slowly.

When someone said, “Drivers in Phuket don’t get enough training”, I thought, some of them were very talented – tailgating at high speed with a gap between cars of mere inches takes real skill. So does launching a passing maneuver by using the u-turn lane.

But as it turns out, these eccentricities kill people in large numbers. Road accidents are the third-leading cause of death in Thailand. Almost 98 per cent of Thai road accidents are caused by human error, say researchers Ratchapan Choiejit and Ratiporn Teungfung.

The first challenge is to convince people there’s a problem. People such as my friend who is planning to get her car driving license in her home province because the one day of training required in Phuket is “too long”.

And my friend who responded “You have to die somehow” after I said I wanted to drive a car because motorcycles were too dangerous. She needs to know that motorcyclists account for 70 per cent of Thai road fatalities.

At the same time, we need a multi-pronged solution.

On Thepkrasattri Road, let’s change the u-turns into traffic lights. Let’s make the fines for speeding so high they hurt, and use traffic cameras to catch offenders.

Some solutions are not so obvious, like providing more parking to make streets safer to navigate.

Some are visionary, like giving away helmets to motorcyclists, then fining the heck out of those who don’t wear them; at the same time requiring all public institutions, including schools, to deny entry to those not wearing helmets.

Who will lead the safe-driving social movement? The government must provide funding for long-term programs and ensure proper enforcement – but there will be a role for everyone: mothers, fathers, monks, teachers and children. What will be yours?