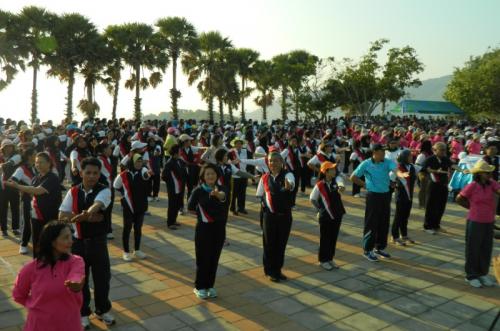 The event was held under the theme “Women Healthy Creative” as part of an ongoing campaign being conducted by the Phuket Women’s Development Center. The objective of the campaign is to raise awareness among Thai women of the importance of keeping healthy through exercise.

“The Phuket Women’s Development Center wants Thai women to exercise so they can be healthy, which will allow them to use their time to their advantage and help to create harmony within the family,” said Boonsupa Tantai, Thai Women Political and Social Development Association Adviser.

“Women in all 17 subdistricts across Phuket are taking part in this campaign, which aims to highlight the ability of Thai women and to encourage all people in Phuket to exercise,” Mr Boonsupa added.

Phuket MP Anchalee Vanich Thepabutr, who is also national president of the Thai Women Political and Social Development Association, led the exercise, which began at about 5pm.

“International Women’s Day is marked on March 8 every year. This day is a chance to show the value, power and importance of women,” Ms Anchalee said.

“Since ancient times, women have worked alongside men and proved their ability to influence and develop Thailand to become a peaceful, happy society, so today is an opportunity to show our strength through exercise,” she added.