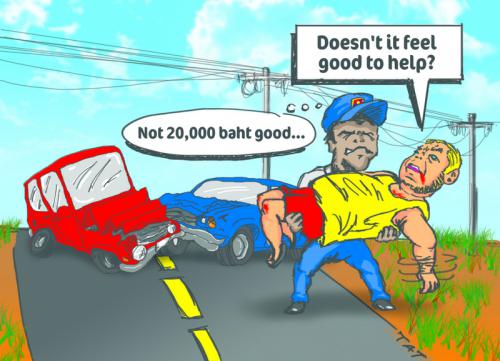 PHUKET: A recent protest in Patong against alleged corruption by Tourist Police officers (story here) will likely go unnoticed nationally given the current state of affairs in the country, yet the issues and the outcry raised offer valuable insights into the serious problems that confront us nationally, locally and individually.

The broader issue is how a democracy can function, let alone flourish, in the context of wide-scale corruption at every level of society. In Bangkok, self-styled whistle blowers are quick to cite corruption and cleverly brand it under the name “Shinawatra”.

Yet, for some reason, they seem more eager to engage in protest against the elusive “concept of corruption” than against those who actively take part in it, day-in and day-out, at the local level.

There are several aspects that make the protest against the Tourist Police in Patong more interesting than the ongoing demonstrations in front of Phuket Provincial Hall.

The impromptu protest, against officers who allegedly extorted 20,000 baht from an Italian national they said was working without a permit, ended with the officers returning the money in exchange for a promise from the foreigner not to file a criminal complaint against them: case closed, back to business as usual.

A thorough investigation into this case, even if the damaged party fails to lodge a criminal complaint, is of utmost importance.

There is little doubt that corruption is rampant throughout all branches of the national police force and that any real national reform will have to address this issue in a meaningful way. It is astonishing that corruption in the criminal justice system has so seldom entered into the current debate.

For an agency that has the protection of foreigners as its stated primary objective, the Tourist Police have a somewhat checkered track record.

In 2006, some of their members orchestrated the arrest of 12 visa runners in Ranong for overstaying their permits-to-stay by just a few days.

Other more recent issues that have soiled the agency’s reputation include the arrest of one of its foreign volunteers on drug charges (story here); its lack of patrols in popular tourist destinations (story here); poor to non-existent foreign language skills; and even ongoing, routine failures to pick up the phone when people call its emergency hotline number, 1155 (story here).

Helping out a stranger in distress is one of the most gratifying acts one can experience, and Tourist Police officers are fortunate to be in the unique position to do this as part of their daily work. Officers tempted to go down the greedy “dark road” should consider the karmic implications of failing to take advantage of the golden opportunity they have been handed.

Phuket Opinion: Just give it time