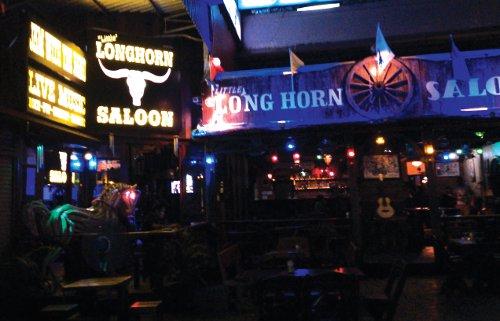 POLICE promptly arrested three Thai musicians for the stabbing murder of American tourist Bobby Ray Carter Jr and the assault of his 27-year-old son in Krabi four weeks ago yesterday. Since then, however, the case has slowed to a crawl. A trial date has yet to be set, police have yet to press formal charges and all three suspects are out on bail. The Gazette‘s Chutharat Plerin reports.

PHUKET: Krabi Police arrived at the Little Longhorn Saloon bar in Ao Nang at about 1:30am on July 31 to find blood spattered on the ground and reports that two foreigners had been seriously injured in a brawl with three band members at the venue.

One of the foreigners, 51-year-old American tourist Bobby Ray Carter Jr, had suffered deep stab wounds. His son, Adam, 27, had also been hurt in the fracas, suffering serious head injuries and a stab wound to the arm. Both had been rushed to hospital.

The three band members –Ratikorn Romin,27, from Phang Nga; Nopanan Yoddecha, 26, from Krabi; and Sathid Somsa, 40,from Bangkok – did not flee the scene and were immediately arrested.

Hours later at Krabi Town Police Station, all three accepted charges related to brawling, but denied any intent to kill.

“We accept that we attacked them, but we didn’t intend to kill anyone,” Mr Ratikorn said in his statement to police.

“The father and son came to the pub and they joined us singing on the stage. Then we had an argument with them because they refused to stop singing when the time was up.

“The father knocked our tip-box to the floor. We left the stage and sat [outside] in front of the bar… After a while they came outside and started another argument with us. The father knocked me to the ground first, and I could not breathe because he was sitting on my chest.

“Then I spotted a sharp piece of metal nearby, so I grabbed it and stabbed him,” Mr Ratikorn said.

All three suspects were charged with inflicting bodily harm causing the death and assault. Mr Sathid was also charged with possession of an illegal firearm after he was found at the scene with a homemade gun.

Despite the fast initial action by police, however, the case has now drawn out beyond expectations and the initial murder charges by police have been rounded down to manslaughter.

“The three suspects have now been charged with causing death by inflicting injury upon the body of such person without intent to cause death,” Krabi Town Police Deputy Superintendent Noppadol Mukda confirmed this week.

“We are now collecting more evidence so we can hand over the case to the Public Prosecutor as soon as possible,” he added.

“The suspects have not been formally charged in court. So far they have only been presented with police charges,” Lt Col Noppadol said.

“We have also yet to find the weapon,” he added.

In order to continue their investigation, police were forced to hand the suspects over to the court, which subsequently granted all three bail.

“Police can detain the suspects only 48 hours before we must release them, so we asked the court to take them into custody. The court then granted them bail. That was the court’s decision,” Col Noppadol explained.

Officers at Krabi Court declined to reveal over the phone any information regarding the bail posted by the three suspects, including how much bail was posted or who may have provided a good behavior surety.

However, an officer at the court’s bail division explained, “Bail is normally set at 500,000 baht for murder suspects, and at about 180,000 baht for assault causing death.”

“The fact that the suspects had not fled the scene and had made partial confessions stood in their favor. That is why the court granted them bail,” he said.

To expedite proceedings, Bobby Ray’s son, Adam, was permitted to give his statement to the court on August 5-7 and then return home to Dallas, Texas.

However, Krabi Provincial Police Deputy Commander Col Boontawee Toraksa declined to relate to the Gazette any statements given by Adam.

Adam’s pre-trial testimony also raised the issue of which translators may be used in giving evidence, as the suspects refused a translator provided by the US Embassy in Bangkok.

“They had the right to refuse the translator, whether or not it postponed proceedings,” Col Noppadol explained.

“As they were out on bail and the trial had not yet begun, they were asked to attend the sessions during which Adam gave his testimony. We could not force them,” he said.

“If everyone agrees, proceedings may go ahead and will be recognized by the court,” he said.

“However, every person has the right to have a translator present to assist in understanding evidence presented to the court,” he said.

Krabi TAT office Director Wiyada Srirangkul confirmed that the TAT Krabi office does offer to provide translators for foreigners involved in criminal cases, a development that arose from the case of a Dutch female tourist who was allegedly raped in Ao Nang late last year. The case made international headlines following the posting of the YouTube music video “Evil Man from Krabi”.

“We provide translators for tourists at the request of the tourists themselves or of their embassies. However, we did not provide a translator for Adam because the US embassy decided to handle it,” she said.

In bringing the case to trial, the public prosecutor in charge explained to the Phuket Gazette that police have 84 days from the day the suspects are presented to the court to actually press formal charges.

“We cannot tell how long it will take. The police have to finish their investigation first,” the prosecutor said, declining to be named by the press.

“We have not set a deadline for pressing formal charges, but it must be done within 84 days of the suspects being handed over to the court,” Col Noppadol confirmed.

Asked whether the case deserved to be prioritized, Col Noppadol said: “That is the judge’s decision.”

Although manslaughter charges incur jail sentences of three to 15 years, Mr Ratikorn confessing to stabbing Bobby Carter is likely to result in a relatively light sentence being handed down.

“If suspects confess, the sentence handed down is usually less severe. However, that all depends on the judge,” the case prosecutor told the Gazette.

If jail time is demanded, the suspects are likely to serve it at Krabi Prison, which incarcerates prisoners who receive sentences of 10 years or less. Prison terms are normally served in the province where the crime was committed.

“However, if they receive sentences of more than 10 years, they will be sent to the maximum security prison in Nakhon Sri Thammarat,” the case prosecutor explained.

Prisoners also receive reduced sentences for good behavior, which means they are likely to not serve full terms, he added.