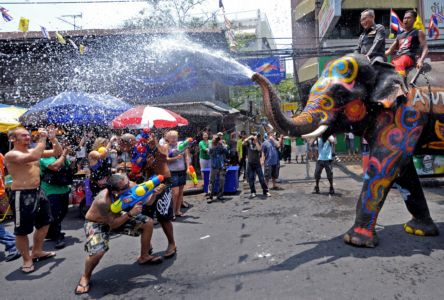 PHUKET: The terrible stomping death of a Swiss tourist by a berserk male elephant last week once again underscores the need to restrict tourism work to female elephants, as many operators who provide these services already do. (See story, current issue of the Phuket Gazette. Digital subscribers click here to download the full issue.)

Riding through the jungle on the back of an elephant is perhaps the quintessential Thai tourism experience. Few who have felt the slow, methodical way these creatures navigate through dense, hilly, and often muddy jungle terrain fail to come away impressed with the beasts’ sure-footedness and agility, especially given their enormity.

Despite enjoying popularity bordering on a tourism cliché, elephant trekking continues to provide education and entertainment to many; income for tourism industry operators in Phuket and elsewhere in Thailand, and livelihoods not only to the mahouts, but also to the elephants themselves.

The latter point is particularly important given the Asian elephant’s status as an endangered species, due in large part to the destruction of its natural habitat by man.

Given what is likely to have been well over a million tourists who have enjoyed elephant trekking in Thailand over the past two decades, it is perhaps surprising that tragedies like the one that befell the Swiss woman have not occurred more often.

Almost all cases of elephants attacking humans occur during ‘musth’, a periodic hormonal condition in bull elephants when a surge in testosterone levels can reach 60 times normal and result in highly aggressive behavior.

Although much remains unknown about the phenomenon, experienced mahouts are acutely aware of the dangers that elephants in musth can pose to themselves and others while in this state, which is why people should always steer clear of any male elephant they see chained to a tree.

We all appreciate the way hormonal changes affect human behavior, but it is hard to imagine what a bull elephant experiences in this condition, the onset of which is difficult for even the most experienced mahouts to accurately predict.

The Phuket Gazette would like to thank Australian couple Sean and Helen Gothe for their remarkable first-hand account of what it was like to be atop the elephant while it was being attacked. We would also like to send our condolences to the family of the deceased woman, and wish fast and full recoveries for those who were injured.

Describing himself as an animal lover, Mr Gothe said he didn’t believe the rogue elephant should be put down, but he doesn’t think it should ever again be allowed to transport tourists either.

Given the horrors of the tour that resulted in the tragedy last week, the Gazette certainly agrees. No doubt, it’s time to reassess the wisdom of allowing male elephants to be employed in the tourism industry.

PHUKET OPINION: Some notes on the value of spam