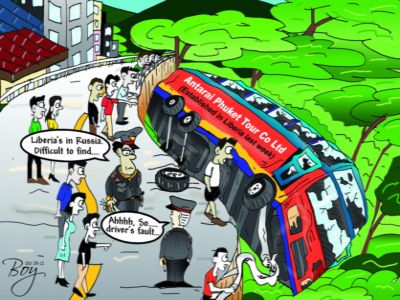 PHUKET: One of the most startling revelations to arise from the bus crash on Phuket’s Chalong-Kata Hill was a policeman telling the Phuket Gazette that there is no provision in law for police to lay charges against a bus owner and/or management company for vehicle malfunctions, such as brake failure.

This is why bus, van and truck drivers who crash in Phuket simply flee the scene whenever they can. Regardless of whether or not the accident was their fault, they will almost surely be blamed.

It seems the authorities have yet to figure out which course of action to take with the October 22 horror crash, which killed one tourist and injured many more. On the surface, it would be all too easy to simply blame the driver and close the file.

[For photos and details of this spectacular crash, see page 3 of the current issue of the Phuket Gazette. Digital subscribers click here to download the full newspaper.]

Brake failure is easily the most common reason given for accidents on Phuket’s steep roads. Was it that again? If it was, it would be the responsibility of the person(s) in charge of vehicle maintenance, not the driver. Thus the predicament facing the police.

Maintenance is one of the first things to go when management feels compelled to cut costs. The Paddington rail disaster in London in 1999, in which 31 people were killed and more than 520 injured, highlighted the problem. Was management at British Rail charged with “killing to save cash”? No.

Many bus and van crashes in Phuket lead to a long chain of mitigated responsibility, the chain in many instances likely to have been created for that purpose. The hapless Chinese tourists on the bus on October 22 had booked their tours with an agent in China, then on arrival were handed off to a local tour operator who hired a bus from a company which, in turn, had subcontracted an “independent operator” to provide the transport.

Often, though not in this particular case, the further investigators go down the line, the worse it gets, so in the end no one is held accountable – except the driver. This is the person who, of all the people in the long and murky chain of “service” providers – corporate, nominal and human – probably had the least to gain to begin with.

Driver rewards in Thailand may or may not be commensurate with driving skills, but are almost surely out of balance with the risks, particularly in a culture where the concepts of insurance and responsibility remain alien in many quarters.

With anonymous and essentially untraceable ownership and management of so many buses, trucks and vans in Thailand, certainly one of the biggest risks faced by a freelance driver is the condition of the vehicle he is asked to risk so many lives in. Since one of those lives is his own, it is probably safe to assume that not all accidents are the driver’s fault.

Yet the police response is Pavlovian. It is rare indeed to encounter a media report in which the driver of a vehicle of any size is not charged with negligence and/or manslaughter following a fatal accident.

What is equally rare, however, is to hear of a conviction, but that is another matter entirely.