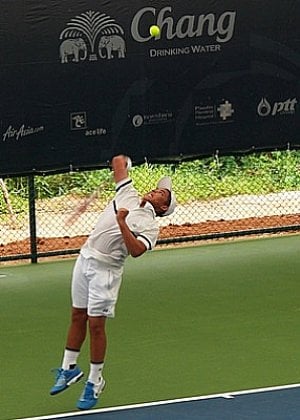 PHUKET: The first Chang ITF Tournament Pro Circuit to be held in Phuket gets underway in earnest today with both Men’s Singles and Doubles main draw matches gracing the tennis courts of the Thanyapura Sports and Leisure Club in Thalang.

Seven seeded players will face their first test with number four seed Laurent Rochette of France (ranked 374 in the world) first on the court at 10am to play Grittaboon Prahmanee of Thailand.

At the same time, the number eight seed, Daniel Yoo of Korea (ranked 498 in the world) will do battle with Mick Lescure, also from France.

Number two seed Jimmy Wang of Taipei (ranked 281 in the world), will hit the courts at approximately 12:30pm for his encounter with Natasith Luesantia of Thailand.

The doubles schedule also starts at 12:30pm and will see the number four seeded pairing of Rohan Gajjar of India and Christopher Rungkat of Indonesia (ranked 438 in the world) take on the Thai pairing of Adrek Khundarnpinitvon and Grittaboon Prahmanee.

Following the 12:30 matches, number one singles seed and number one Thai player Danai Udomchoke (ranked 199 in the world) joins up with singles number five seed Zhe Li (ranked 390 in the world) as this competition’s number two doubles seeded pair to clash with Koreans Soong-Jae Cho and Ji Sung Nam.

Thai doubles pairing and number three seeds Weerapat Doakmaiklee and singles number three seed Kittipong Wachiramanowong (ranked 521 in the world) take on the partnership of Jason Patrombon of the Philippines and Marc Reyes of Italy to end the day’s play.

As sponsors of the Chang ITF Tournament Pro Circuit 2011, the Phuket Gazette will keep our readers informed of results as the event progresses.

Thailand U23 outshine Phuket All Stars