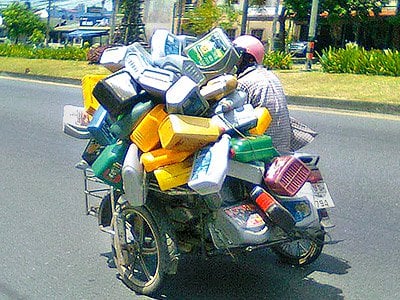 PHUKET: The crackdown on motorbike passengers having to wear helmets has been excellent, though it hasn’t stopped parents from carrying babies, talking on a mobile phone, or smoking (or all three) while driving.

I understand the trusty Honda Dream is the sole mode of transport for many families on Phuket, and that if they could afford something with four wheels they would probably buy it.

But the problem with dangerous sidecars still plagues us. Years ago, a policeman with exceptional common sense came right out and said the police tolerate sidecars because poor people need to make a living. But he added that police would also pull over the ones they thought were unsafe. Good man.

The only problems are: Would the police really do that? And, which ones are unsafe?

This week I saw two beautiful examples of (very) ‘unsafe’. One man was driving along the notoriously dangerous Thepkrasattri Road overloaded with recyclables. Now, obviously a collector of such materials cannot afford a pick-up, and the driver was wearing his helmet – but he was clearly putting his life at exceptional risk.

The other example was a mobile food vendor who had his sidecar fitted with two steel cages: one for his gas bottle and another for a tub of ice. The problems? The gas bottle was in the perfect place to be struck by a vehicle from behind, and the ice bucket blocked the taillight completely.

Perhaps the Transportation Office could have a range of sidecar designs deemed ‘reasonably safe’. (A higher rating than that would not be possible.)

And who could we get to design the drivers?

Phuket Opinion: Policy on Thai residency should not be secret

Phuket Opinion: ‘No budget’ no excuse for road mayhem