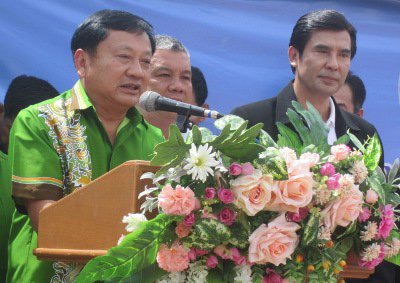 PHUKET: A high-power delegation of officials this morning met villagers in Srisoonthorn to reinforce the message that Phuket was not about to sink – and to get the day’s scheduled fun activities underway.

Governor Tri addressed the villagers, telling them, “We are here today to restore people’s confidence and I would like to thank all Phuket people for showing good sense in light of rumors that have been circulating recently and not discrediting Phuket. Even tourists who have heard of the rumor are still coming to Phuket. All flights are full as usual.

“This rumor does not only damage Phuket tourism it is also considered a threat to public safety, to which end I have filed a complaint against the rumormonger,” Gov Tri added.

Gov Tri went on to say that 504 households were damaged by the earthquakes but he would receive the official report from Thalang District officers on May 1.

After that, on May 7, he and Deputy Prime Minister and Interior Minister Yongyut Wichaidit would return to personally hand out the compensation payments.

Gov Tri concluded his speech by reiterating that rumors were just rumors and that people should believe in the government and Phuket’s sustainable potential.

Local resident Mina Kahapana, 58, told the Phuket Gazette, “I was scared of the rumor, especially because of the earthquake on April 16. I was thinking about leaving Phuket, but when the government announced that it was just a rumor and there couldn’t possibly be any truth in the ‘doomsday’ story, we decided to stay.

“Some people [originally] from other provinces have left the village, but the locals are still here. We are not going anywhere,” she added.

Phuket’s British Honorary Consul Martin Carpenter accompanied the visiting delegation. “To be honest I do not think many tourists coming to Phuket are aware of this scare. It is unfortunate that small earthquakes hit Thalang. They did not really cause structural damage but it’s a shame that such rare occurrence has spawned such a damaging rumor,” he told the Gazette.

“I am here today to provide support to the governor and authorities in Phuket. They’ve worked very hard over the past two weeks to crush the rumor and to keep people in Phuket safe, and a state of mind where they know they are not going to witness a major disaster in Phuket,” he said.

“It’s the tsunami history that has always been the worry. However, I do believe the governor and local authorities have made a really good effort to ensure the safety of Phuket and tried their very best to put a reliable system in place.

“If there is another tsunami off the coast of Indonesia as there was in 2004, I think we will have plenty of warning if something really bad were going to happen,” said Mr Carpenter.

Live Wire: Google Street View has Phuket all mapped out

FC Phuket hoping for a big catch in Sri Racha