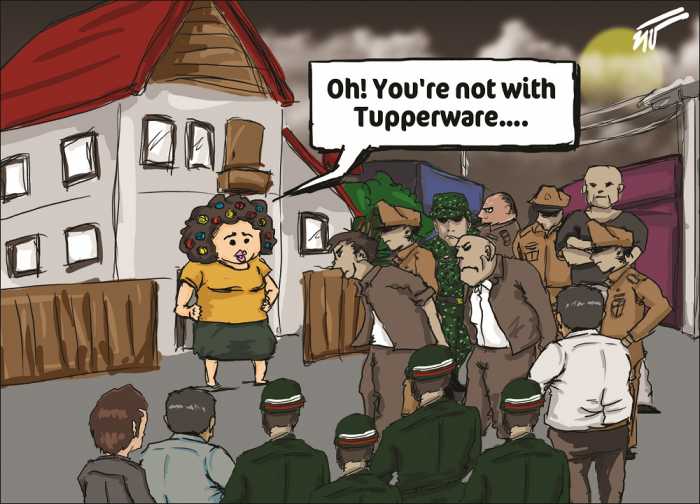 PHUKET: The recent joint police and military raid on the home of a prominent resident of Srisoonthorn has resulted in an order from Phuket’s governor for an investigation into why such heavy-handed tactics were required in what is ostensibly a case of alleged check fraud.

While the December 3 raid failed in its goal to bring Mr Padungsak Songyot into custody, the manner in which the operation was carried out was enough to embolden hundreds of supporters of the Songyot family to march on Phuket Provincial Hall (story here).

The protest on Monday was the first major gathering there since the National Council for Peace and Order (NCPO) seized power on May 22 and immediately imposed a ban on all protests and political assemblies of more than five people.

Praise must go to Phuket Governor Nisit Jansomwong for personally receiving the complaint and for acting on it so swiftly.

But what observers around the world will be focusing on is the claim by the local police that they had the authority – under martial law – to not present a warrant to search the premises, or indeed to present any identification at all to confirm their status as officers of the law.

The NCPO came under criticism in its initial weeks of control of Thailand for its arrests and subsequent interrogation of suspected political agitators, but the junta responded quickly with a barrage of public declarations and press conferences to show the people in Thailand and abroad its intentions and achievements in bringing order out of the preceding years of political chaos.

The Phuket committee tasked with investigating the December 3 raid would do well to follow in the junta’s footsteps.

The NCPO has publicly declared on multiple occasions that the law stood substantially as it did under the Constitution that was in place when it seized power. Unless a clear explanation is forthcoming, the December 3 “raid at will” has the potential to undermine that message.

Faith in the Thai police in recent years has not been at its zenith. The scandal of former “crimebuster” Gen Pongpat Chayapan and his henchmen, who abused their power to profit to the tune of more than a billion baht, has done little to help (story here).

Closer to home, the Srisoonthorn raid has ignited Thai social media with questions as to how a “bounced check” could have lead to an operation more akin to a raid on a separatist hideout somewhere in Yala, Pattani or Narathiwat.

Given the nature and scale of the raid here, the impartial investigation promised by the governor and provincial police must answer some of the many questions now troubling local residents.

The need for transparency has never been greater. The rules must not only be observed; they must be seen to be observed. That is the only way to restore faith in what is already a fragile system.

Opinion: Time to forge a new future for Phuket