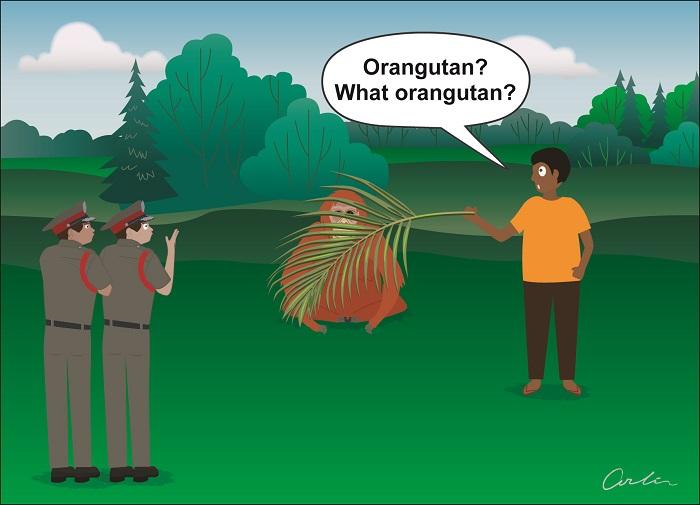 PHUKET: The tale of the disappearance of orangutan Milo from a local zoo and her subsequent rediscovery a few days later deserves a slot in the annals of the ‘Amazing Thailand Always Amazes’ series.

Now that the issue has drawn the interest of the national and international media, the Phuket Gazette hopes that sustained interest will pressure the Department of National Parks (DNP) and other regulatory agencies to do a better job in honoring Thailand’s commitments under the Convention on International Trade in Endangered Species of Wild Fauna and Flora (CITES).

Such an effort could start with a thorough investigation into how Milo came into the zoo’s possession in the first place; how the DNP could have failed to notice her presence there during numerous inspections over several years; and the zoo’s incredible explanation of her “release” back into the jungle while still padlocked inside a cramped cage.

Following the big cat brouhaha at the infamous ‘Tiger Temple’ in Kanchanaburi, Milo’s story is just the latest in a succession of cases in which some of the world’s most highly-evolved, yet critically endangered, species are illegally imported, traded and disposed of in this country.

In almost all cases, demand for the creatures is fueled by the tourism industry. While it might be impossible for the DNP to monitor all zoo exhibits, violations involving high-profile endangered species like the orangutan should at least raise the suspicion that collusion and kickbacks just might be involved.

Milo’s case certainly highlights the increasingly important role of social media in raising public awareness of the plight of sentient creatures, like the orangutan, that are forced to waste away through years of physical and mental deprivation, if not outright torture at the hands of greedy entrepreneurs whose illegal operations are ever-so-conveniently ignored by officials.

Back in 2008, when the Phuket Crocodile Farm and Tiger Zoo was still in operation near the Nimit (Sea Horse) Circle in Phuket Town, a similar tale unfolded in which 12 unregistered orangutans were discovered following an anonymous tip-off to the Wildlife Friends of Thailand, the same NGO that has been active in Milo’s case.

These orangutans were later recovered after being dumped along a roadside after the zoo operators apparently learned that an inspection was imminent. In that case, the zoo owners were never charged for illegal trade or possession of the primates, thus upholding the unspoken precedent that violators of smuggling laws could simply dispose of animals at the last minute to avoid prosecution.

It will be interesting to see if public pressure, especially via social media, has reached the point that Thai officialdom will be forced to actually investigate Milo’s case, and, if so, put those responsible before the courts. Such a move might overturn the existing sad state of affairs in a way that would be truly ‘Amazing’.