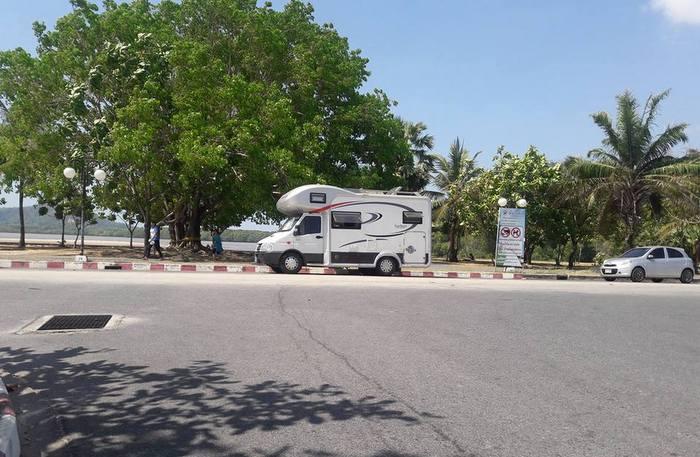 “I was told that these vehicles stay over night in public places, such as Saphan Hin, Ya Nui and Nai Yang beaches,” said Phuket Vice Governor Prajiad Aksornthammakul at a meeting on Wednesday.

“I’m worried that if we ignore this matter, it may affect the island’s tourism,” he said. “People travelling in these vehicles do not pay for hotels or restaurants. Instead, they buy food from convenience stores or markets. This takes away a lot of income from the island, while simultaneously creating more traffic and pollution.”

The RVs in question entered Thailand via the R3A route, which is part of the North-South Economic Corridor that links Thailand with Laos and China. The road route from Kunming, in China, crosses the Mekong River at Huay Xai in Laos and enters Thailand in Chiang Rai (story here).

“A lot of these motor homes are now arriving in Chiang Rai. We do not want it to become an issue here in Phuket,” said V/Gov Prajiad.

“The vehicles may be able to cross the border and comply with customs laws. However, they are not necessarily complying with land transport laws,” Phuket Provincial Police Deputy Commander Saman Chainarong.

Phuket Land and Transport (PLTO) Chief Policy Adviser Jaturong Kaewkasi explained to the Phuket Gazette that most of the RVs in question were breaking the law.

“Some of these motor homes are illegal because they have failed to be registered with the Land and Transport Office before entering the country. Additionally, it is possible that some of the drivers are not carrying the necessary driver’s licence,” Mr Jaturong said.

Though there are concerns about the legality of the RVs, Thailand does already have a number of fees in place with regards to the vehicles entering the Kingdom.

Thailand levies a 1,300 baht visa fee on inbound vehicles and a 400 baht insurance fee, as well as a 200 baht border pass fee. Adversely, to enter China, an insurance deposit of 300,000 baht is slapped on Thailand-registered vehicles, including additional fees, such as a 15,000 baht fee for each Thai tourists aboard the vehicle, reported The Nation.

“This is not the way for Phuket to attract more quality tourists; these visitors will be introducing very little money into the local economy,” said Sathit Klinpakdee, chief of the Department of Local Administration Phuket Office. “To balance the loss of potential revenue, Thailand should consider increasing the fees on the vehicles when they enter the country.”

Meanwhile, Santi Pawai, chief of the Ministry of Tourism and Sports (MOTS) Phuket Office, stated that he will be working with the Land Transport Office and Customs Department to reconcile differences in their regulations to help clarify what needs to be done.

“Customs and land transport laws contradict each other with regards to motor homes. We have to do something about it. However, I do not think arresting the people that are already here is wise,” Mr Santi said.

“I think we should just allow them to be here until their visas expire. Then, we must look at implementing some type of zoning that creates a clear area for them to park, as well as dump their waste.”

Mr Santi added that he will request that motor homes not be used for daily transport on the island, saying that their owners should either hire a taxi or use public transport to get around.

“We do not want to prohibit tourism to the island. However, we need to be aware of the pressures this type of tourism will have on the island, and implement necessary regulations,” Col Saman said.

V/Gov Prajiad noted that until solid regulations are put in place, local authorities would be in charge of accommodating mobile homes in their areas, as well as confirming that the vehicles and their occupants are legal.