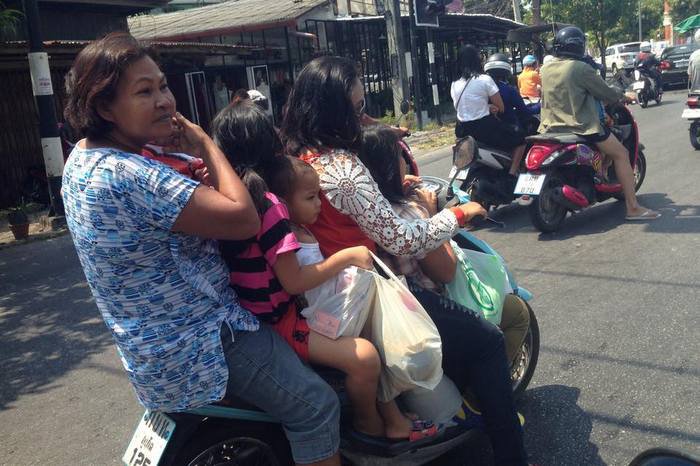 PHUKET: I’m a recent arrival in Phuket after spending several months in Bangkok where I purchased a Honda CBR150 sports bike and then dared to negotiate the city’s infamous traffic.

I’d been cautioned not to do so because of the potential for injury or death, but having successfully driven a Chinese-made 150cc motorcycle, which resembled a scaled-down Harley, on the streets of suburban Beijing, I decided I was up to the challenge.

I was cautioned again by my Thai friends about riding the ‘windy’ roads of Phuket, which I’ve found to be quite formidable (especially the mountain-pass road from Kathu to Patong).

One dangerous difference I’ve seen is the higher percentage of motorcyclists here who don’t wear helmets, especially after dark, compared to Bangkok.

But what shocked me the most, although the first time I saw it I thought ‘cool’, were children riding helmetless in wooden chairs perched between the legs of their parents. As I said, my first reaction was to smile and think ‘cool’, but on reflection the word that came to mind was ‘stupid’.

Many more years ago than I care to acknowledge, when I was a firefighter/paramedic in California, a guy driving a Corvette accelerated away from a stop sign and struck my motorcycle, launching me over his ‘Vette’.

Fortunately, I was wearing a helmet, because the first thing that hit the asphalt after I flew through the air was the back of that helmet. Then my butt slammed down, I bounced, flipped again and slid face down into the middle of the intersection.

To shorten a long story, I survived without even abrasions. My only injury was desensitized nerves in the part of my butt that hit the asphalt, which took about two weeks to return to normal.

If I had not been wearing a helmet (we used to call them brain buckets), I’m sure I would have been a fatality. And twice, as a paramedic, I responded to accident scenes where a helmetless motorcycle rider died due to head injuries.

I know wearing a helmet is the law here, but I also know the law is not always strictly enforced.

I also realize that for many Thai people motorcycles are an affordable means of transportation. But if I see an adult, Thai or foreign, riding a motorcycle helmetless, shoeless and shirtless, I shrug my shoulders and think: ‘Stupid is as stupid does. And there is no cure for stupid.’

But when I see an adult, with or without helmet, driving a motorcycle with one or more children without helmets on board, I have to wonder if they don’t recognize the danger or just don’t care.