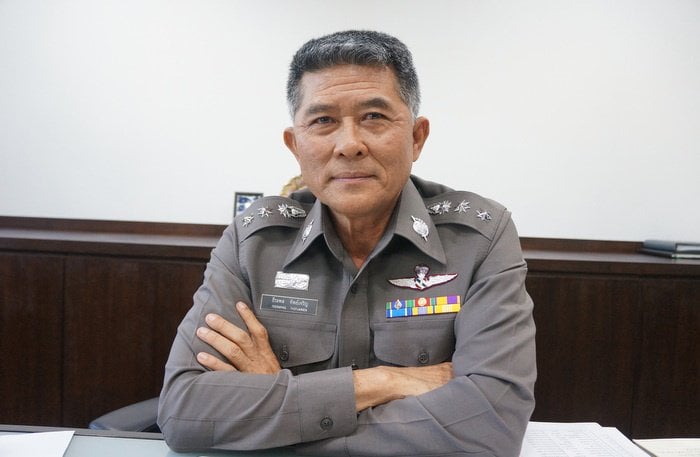 Phuket Provincial Police Commander Teeraphol Thipjaroen, 56, is a Prachinburi native. He graduated from the Royal Police Cadet Academy and has been working in Phuket since 1983, except for brief postings to Krabi and Surat Thani.

Here he talks about how building trust and offering support to Phuket’s police force will help create a happier working environment for officers, which in turn will foster a better relationship between police and residents of the island.

PHUKET: I have basically worked in Phuket since I first graduated from the academy.

I have known people on the island for a very long time. However, Phuket is constantly growing and new people are always coming in, which means our problems are more complicated than in other parts of the Kingdom.

When I accepted this position as the police commander of the island, the only thing I could think about was how I wanted to make it better. I will use my experience to help me accomplish this.

I am not afraid to work hard, but I can only do so much. There are many projects happening on Phuket right now, so the challenge is to ensure that our police officers are happy with their work. I truly feel that if they are happy with themselves, then they will ensure that the people of Phuket are happy too.

To achieve this, I will look closely at their welfare, resources and support systems to see what I can do to improve those areas and give my officers more confidence in their work.

I want to build a strong team. As a leader, I will coordinate with other departments to work together with us and drive us toward success. We cannot hope to be successful without the support of others.

I aim to be more than just a commander to these officers, more like a coach and avid supporter. I believe that if they see how hard I work for them, then they will work hard for me, and for all of Phuket.

When people become police officers, they understand what the job entails. However, I think that Phuket is a rather complex place to work and also has a higher cost of living than other places. In addition to the local community, we are constantly attracting tourists and expats who live and work here, as well as Thai people who are not registered as residents.

Compared to the number of people in Phuket, the number of officers is hardly enough. We only have about 1,200 police officers taking care of about 12 million tourists a year in addition to the locals and expats.

If we do a rough calculation using only registered residents, there is roughly one police officer per 250 people. However, we are doing our best and utilizing the services of police and civil defense
volunteers to support our ever-growing network.

As for what the officers need to focus on, criminal activity is always a major problem. A lot of this is related to drug use.

The drug situation in Phuket is quite disturbing and it is spreading quickly among teens. Most of the time it is linked to family problems due to the worsening economy.

That being said, police cannot fix this problem alone. Arresting drug users and dealers is only an end result, not a solution.

I find that in Phuket, the people generally help each other and look out for crime, and in turn, this helps the police to do their job more efficiently.

If we can create an environment where we all try our hardest and everyone helps one another, then we can make Phuket the best that it can be.